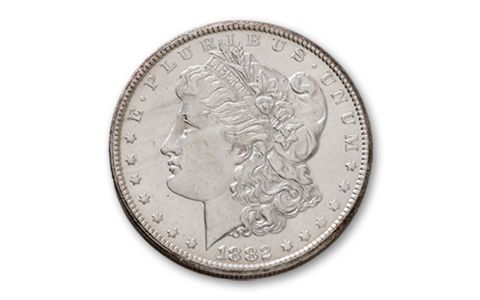 Availability: In Stock
This item will ship within 2 business days.
Item #
228897
CC Payments as low as
$348.75 / month
Add to Wish List Add to Wish List Wishlist is for registered customers. Please login or create an account to continue. Add to Compare

Like many gunfighters and cattle rustlers, the life of the Carson City Mint was brief, but memorable. Only 2% of all Morgan Silver Dollars were struck at the Carson City Mint, making Morgans with the "CC" mintmark harder to find with each passing decade. The silver in these popular dollars was mined from the famous Comstock Lode in Nevada - the very reason for the establishment of the Carson City Mint. The exceptional Carson City Morgans in this set include the consecutive dates of 1882, 1883 and 1884 - all amazingly in Brilliant Uncirculated condition.