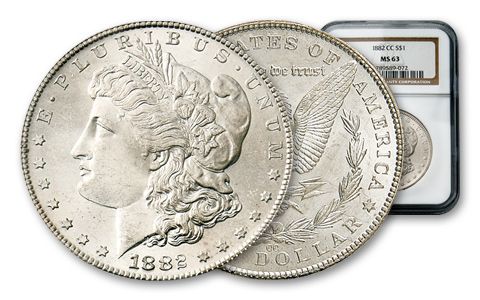 Availability: Out of Stock
This item is currently Out of Stock. Please sign up to be notified if this product becomes available.
Item #
222141
Add to Wish List Add to Wish List Wishlist is for registered customers. Please login or create an account to continue. Add to Compare

With mintages much smaller than other Morgans, 1882 to 1884 Morgans issued by the Carson City Mint are truly scarce today, especially those graded in Mint State-63 (MS63) condition by NGC or PCGS. Their famous "CC" mintmark says it all-these 90% silver coins are genuine artifacts of the Old West. Dates vary.