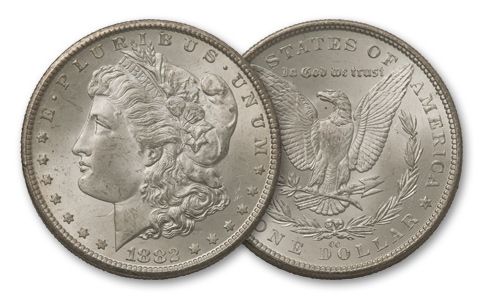 Availability: Available for Order
This item will ship 06/09/21
Item #
249794
CC Payments as low as
$166.65 / month
Add to Wish List Add to Wish List Wishlist is for registered customers. Please login or create an account to continue. Add to Compare

Most coin collectors are interested in history, and we share that passion. So when coins show up that have a connection with local history, we perk right up. That’s what happened when we were offered a small cache of 1882 Carson City Silver Dollars in Brilliant Uncirculated (BU) condition. What’s the connection? Well, about 30 miles dead south of our office is Northfield, Minnesota, where the Younger Brothers and Jesse James staged that fateful raid in 1876. These 1882 90% Silver Dollars were struck in the year Jesse James died. Since Jesse was planning another robbery when he was gunned down, he could have had his sights set on some of these very same brand new Carson City Morgans! That makes this a great collectible Silver Dollar and a real piece of American history. We have only 28 coins available, so order now to secure yours!