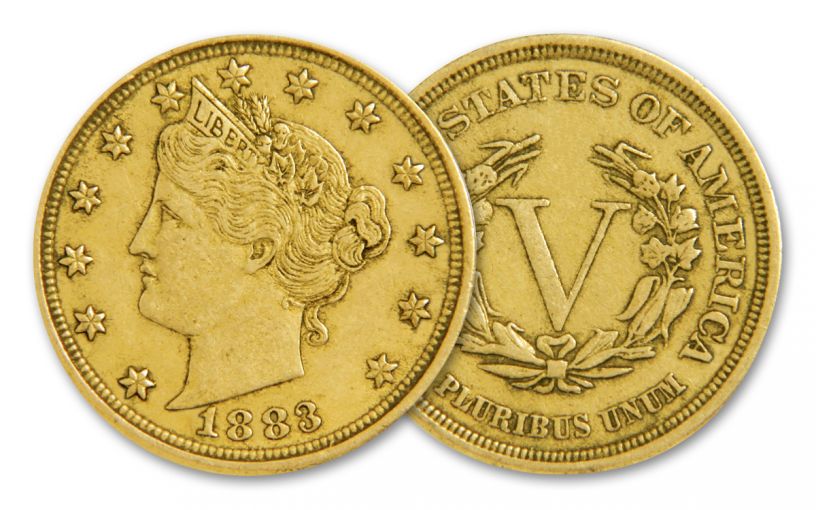 Availability: In Stock
This item will ship within 2 business days.
Item #
353348
Add to Wish List Add to Wish List Wishlist is for registered customers. Please login or create an account to continue. Add to Compare

The Cents-Less Release of the “Racketeer” Nickel

While some citizens marveled at the beauty of the new Liberty Nickel when it was released by the U.S. Mint in 1883, others saw only an opportunity to make a fast buck. You see, the center of the reverse features a large “V,” the Roman numeral for five, but nowhere on the coin do the words “five cents” actually appear. As it so happened, the nickel was also close in size to the $5 gold piece, which had a similar design. This prompted quick-thinking con artists across the country to plate the nickels with gold, and then pass them off to unsuspecting merchants as new $5 gold pieces!

Despite the fact that U.S. Treasury officials publicly scoffed at the idea that the coins could ever be used for something so nefarious as counterfeiting, in private they quickly came to their senses and quickly added the word “CENTS” to the coin’s reverse in an effort to put an end to the fraudulent practice. Since then, the U.S. Mint has never again failed to put a denomination on a coin. The quick re-design of the Liberty Nickel also had the unintended consequence of creating a unique, one-year-only variety that is very popular among collectors, who have nicknamed the “No-Cents” coin the “Racketeer Nickel.”

Only about 25 percent of the entire first-year 1883 mintage of Liberty Nickels are of the “No Cents” variety. Now you can obtain one of these devious pieces of history complete with 24-karat gold plating. Each 1883 Racketeer Nickel available in this offer is more than 135 years old and comes presented in a display folder and accompanied by a fact-filled storycard.

The U.S. Mint’s release of the “Racketeer” Nickel was a cents-less decision, and that mistake can be your gain. Click this unusual piece of American history to your cart today!