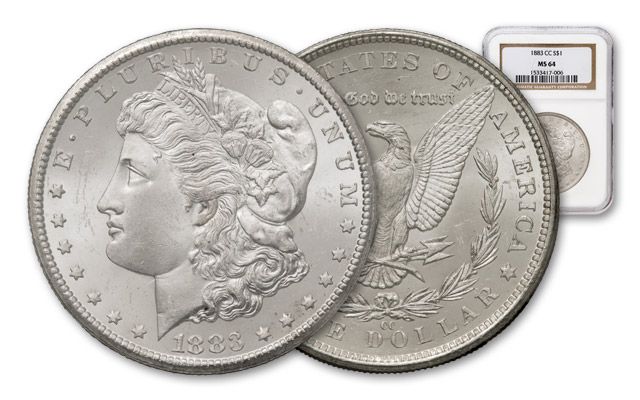 Availability: Available for Order
This item will ship 08/06/20
Item #
258746
CC Payments as low as
$225.00 / month
Add to Wish List Add to Wish List Wishlist is for registered customers. Please login or create an account to continue. Add to Compare

The rush is on for these hard-to-find Mint State 1883-CC Morgans!

You may know Carson City as the capital of Nevada … or for its rowdy, wild-west reputation as a boomtown after the 1859 discovery of the legendary Comstock Lode's silver bonanza! But, you may not realize that it's also the birthplace of one of America's most coveted silver coins: the "CC" Morgan Silver Dollar. Finding any Morgan with a "CC" mintmark today is about as easy as finding buried treasure in your backyard! Here's why:

While most of Comstock's silver was shipped to U.S. Mints in Philadelphia and San Francisco, a tiny number of these big silver "Cartwheels" were struck at the branch mint right in Carson City, but that was still just 2% of ALL Morgan Silver Dollars ever minted! And, to make matters worse, millions of Morgans from all three mints were melted down for their silver content between 1918 and 1965. In fact, it's estimated that as few as 15% of the Morgan Silver Dollars EVER minted still remain for avid collectors!

So, finding any quantity of scarce Carson City Morgan Silver Dollars won't get any easier in the years to come. But, despite those odds, you can still pocket a genuine 1883 Carson City Morgan - each authenticated, certified and graded Mint State MS64 condition by Numismatic Guaranty Corporation (NGC) or Professional Coin Grading Service (PCGS). Just don't wait. Not many Morgan Silver Dollars in Mint State condition exist today from ANY U.S. Mint, and with just 56 coins available, this could be your first and last opportunity to add this hard-to-find 1883-CC Morgan to your collection.

Make sure one of them belongs to you - order now!