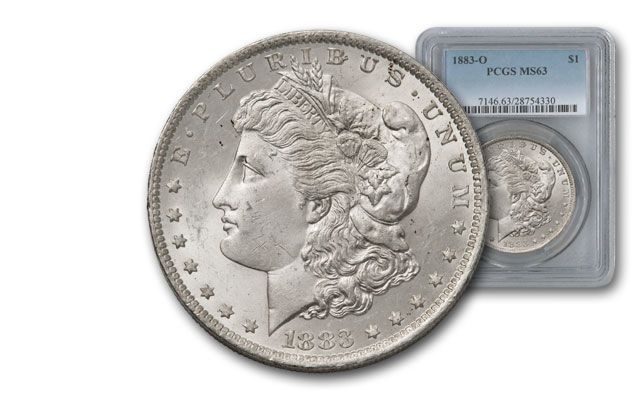 Availability: Out of Stock
Discontinued Product
Item #
225599
Add to Wish List Add to Wish List Wishlist is for registered customers. Please login or create an account to continue. Add to Compare

The Morgan Silver Dollar is coveted by collectors the world over, and it is arguably the most famous and collected U.S. silver coin of all time. Due to aggressive demand in today's U.S. coin market, quantities of Morgan Silver Dollars have dried up over the years, making them harder and harder to find. Even though there were hundreds of millions of Morgan Silver Dollars struck between 1878 and 1921, hundreds of millions of them have been melted and many more have been worn down in circulation. The Pittman Act of 1918 was enacted by the U.S. Government and 270 million Morgan Silver Dollars, nearly half of the entire mintage, met their fate in the melting pots. It has been estimated that only 17% of all Morgans minted exist today in any condition. The New Orleans Mint was opened following heated congressional debate between Northern and Southern politicians over the financial independence of the South. Previous to this, the South relied on the Philadelphia Mint in the North to produce much of its coinage. This 1883 New Orleans Mint Morgan grades Mint State-63 (MS63) by Professional Coin Grading Service (PCGS). Add it to your collection today!