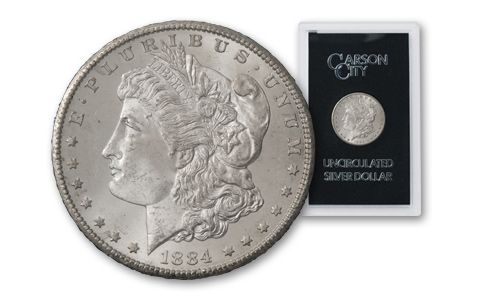 In the 1960s, the U.S. Treasury did an audit of Silver Dollars that had been stored in their vaults for nearly a century. What they found sent the collector world reeling. Bags and bags of fresh never-circulated Carson City Mint Morgans. Beginning in October 1972, the coins were sold sealed in some of the very first plastic coin "slabs." Over the 30+ years since the sale, most of the coins were broken out of the slabs. Today, they are very hard to find in original packaging. We're pleased to offer a small cache of these Brilliant Uncirculated (BU) 1884-CC Morgans to you today. And every one is still in its original government packaging. But call fast—our small supply won't last. It's American history locked away and saved for you and your family!