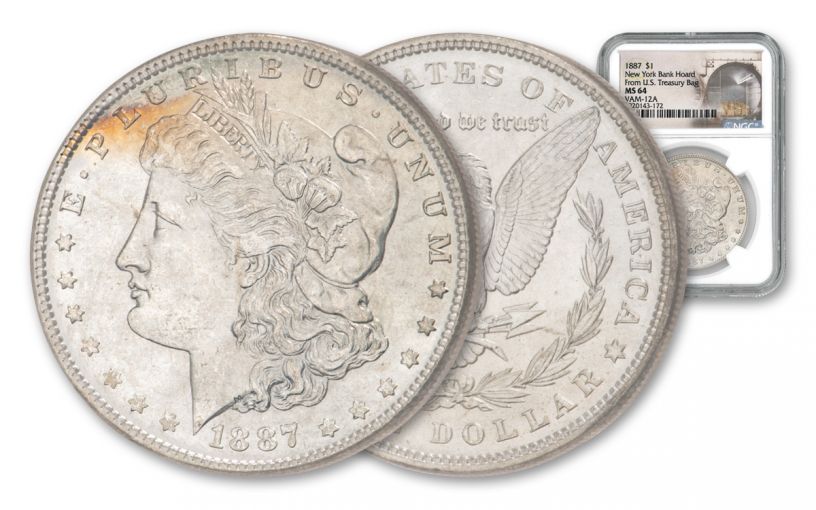 Availability: Call-In Only
This item is only available on a Call-In basis. Please call 1-800-510-6468 to speak to a representative.
Item #
343187
Add to Wish List Add to Wish List Wishlist is for registered customers. Please login or create an account to continue. Add to Compare

The VAM variety available in this offer is an 1887 VAM 12A Morgan known as the Alligator Eye Morgan due to the doubled die over the eye, the doubled LIBERTY on the right side and clashed obverse die. In addition to its unique die variety, this coin has also been certified and graded by the Numismatic Guaranty Corporation as being in Choice Uncirculated Mint State-64 (MS64) condition and sealed it a protective coin capsule with a special pedigreed label certifying that it hails from the famous New York Bank Hoard of U.S. Treasury Hoard Morgan Silver Dollars. As an added bonus, you’ll also receive a book about Morgan Dollars and booklets about the New York Hoard and the Treasury Hoard release.

There were only 23 VAM 12A Morgan Silver Dollars found in the New York Bank Hoard, and we believe these are the only VAMs of their type from ANY group of Treasury Hoard Morgans. Hurry and secure yours now!

Get a piece of the New York Bank Hoard of Morgan Silver Dollars from the original U.S. Treasury Hoard with this unique VAM 12A “Alligator Eye” die variety. Availability is extremely limited so reserve yours now!