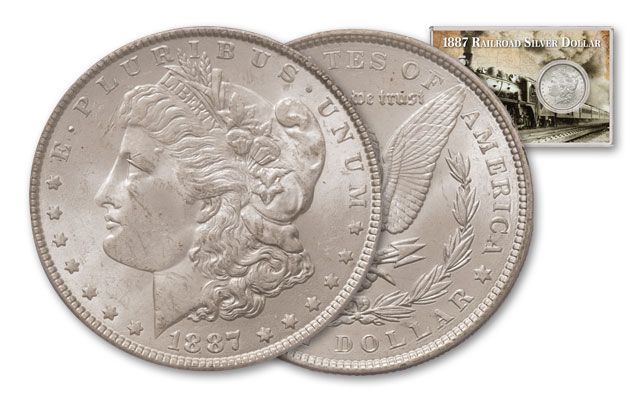 Availability: In Stock
This item will ship within 2 business days.
Item #
270768
Add to Wish List Add to Wish List Wishlist is for registered customers. Please login or create an account to continue. Add to Compare

All Aboard the “Iron Horse”

In 1887, Congress passed the Interstate Commerce Act to reign in the railroad industry. With this law, railroads became the first industry in America subject to federal regulation. The law was enacted due to the public’s demand that Washington do something about the unchecked monopolies the nation’s railroads had created following the Civil War. Among other things, the Act required that railroad rates be “reasonable and just.”

While politicians debated the merits of the new federal law, the average wage paid to workers laying track out West was about one dollar per day – or around $25 in today’s economy. Now you can feel like a regular “Gandy Dancer” laying miles of track on the railroad with this 1887-P Morgan Silver Dollar from the Golden Age of Railroads. Each coin in this offer was struck at the Philadelphia Mint and comes in Brilliant Uncirculated (BU) condition with nice sharp details and lots of original mint luster. Imagine how proud those workers were to receive one of these big silver coins after a hard day’s work – work that relied on songs and chants to establish a dance-like rhythm that synchronized the back-breaking physical labor.

Trains played a central role in the race of westward expansion. In the decades leading up to the Civil War, track was laid all over the United States, and most towns could claim that they were just a short distance from the nearest depot. By the 20th century, railroads crisscrossed the nation carrying passengers and freight, and in doing so became an unrivaled transportation network. Now you can add this unrivaled piece of history to your collection without having to work on the railroad all the live long day!

There’s no need to rise up early in the morn to get your hands on this coin; just click it to your cart now and you won’t need Dinah to come and blow her horn!