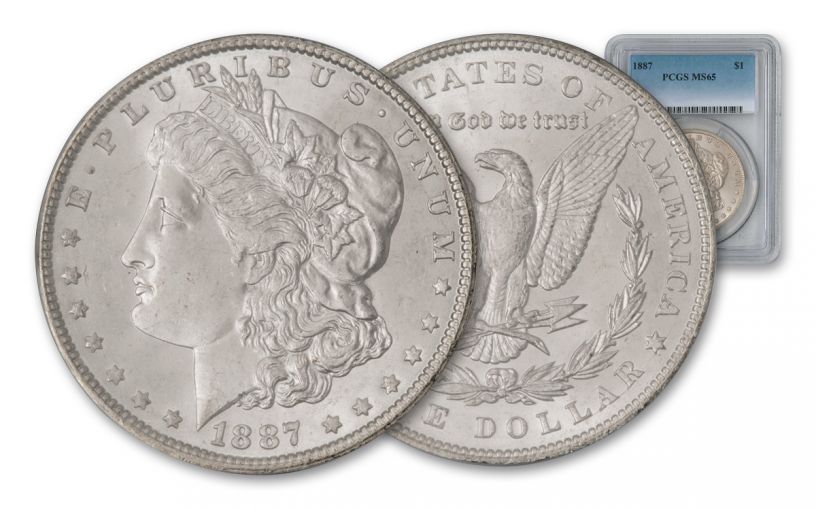 Availability: Available for Order
This item will ship 01/28/21
Item #
226440
CC Payments as low as
$124.50 / month
Add to Wish List Add to Wish List Wishlist is for registered customers. Please login or create an account to continue. Add to Compare

Philadelphia Morgans from the Height of the Comstock Lode

In the 1880s, Nevada’s Comstock Lode was in full production, with loads of silver making its way East for striking at the Philadelphia Mint. Among the coins struck were these Morgan Silver Dollars, minted in 90% fine silver. The Morgan circulated heavily around the United States, and eventually as much as 85% of all Morgans struck wound up being worn down or melted for their silver.

Incredibly, we’ve located 1887-dated Morgans struck at the “Mother Mint” in Philadelphia that are still in phenomenal condition. In fact, each coin available here has been graded by either the Numismatic Guaranty Corporation (NGC) or the Professional Coin Grading Service (PCGS) in Gem Brilliant Uncirculated Mint State-65 (MS65) condition! Grading service varies.

This incredible Morgan Silver Dollar was struck during the heyday of America’s “Gilded Age.” It’s an absolutely sumptuous 90% silver coin that comes from the final days of America’s storied Wild West. It’s truly a beautiful piece worthy of any collection. Just 20 are available, so secure yours now!

Step back in time to the late 1800s and secure a gleaming Morgan Silver Dollar struck at the Philadelphia Mint. Start, complete or add on to your Morgan collection today!