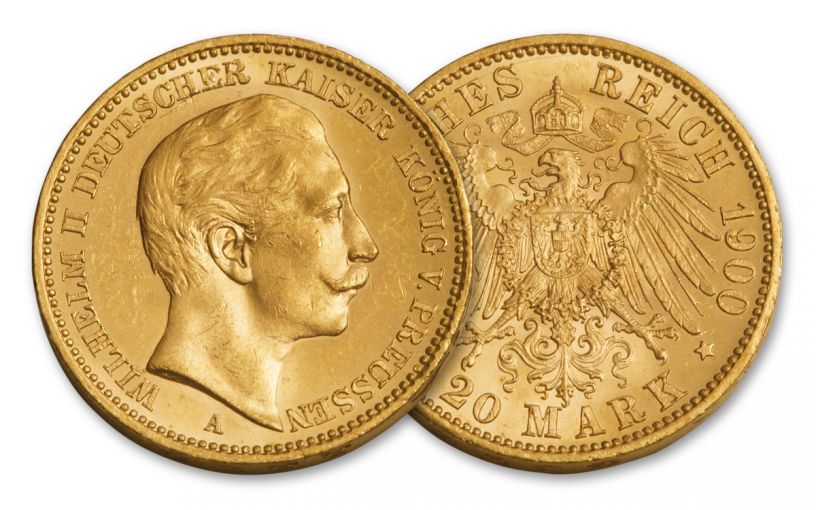 Availability: In Stock
Discontinued Product
Item #
254914
CC Payments as low as
$231.67 / month
Add to Wish List Add to Wish List Wishlist is for registered customers. Please login or create an account to continue. Add to Compare

These 1888–1915 Germany 20 Mark Gold coins of Kaiser Wilhelm II were struck during an era when Germany was entering the stage as a world power. Germany’s industrial might was unsurpassed in Europe, and her Kaiser’s future looked bright. Then, in a flash, it all crumbled to dust. By 1918, the German Empire and the Kaiser were both gone, casualties of World War I — the War to End All Wars. And, what happened to the Kaiser’s gold? Most of it was melted to sustain the German war effort, and the few coins that did survive were doomed to face the melting pot many more times in the 100 years since they were last struck.

Today, these coins are scarce and hard to find, and groups of these wonderful and historic pieces are rarely seen! But thanks to our connections in the coin world, we’ve managed to locate a small number of survivors. This is your chance to secure a rare German Gold 20 Marks coin that was struck in the years leading up to and during the first years of WWI. Each coin contains 7.965 grams of highly pure 90% pure gold and features the proﬁle of Kaiser Wilhelm II. The reverse displays a powerful crowned eagle. And, at 23 mm in diameter, it’s about the size of a U.S. quarter.

The oldest grandchild of Great Britain’s Queen Victoria, Wilhelm ruled from the age of 29 in 1888 until near the end of World War I in 1918. Interestingly, he was a first cousin to Great Britain’s George V, and a third cousin to Russia’s Tsar Nicholas II — his two chief rivals during the war. While he was an extremely intelligent man, Wilhelm was cursed with a quick temper and an impulsive, high-strung personality. He also suffered from dysfunctional relationships with both his parents, particularly his English mother. He abdicated before the end of the war and sought exile in the Netherlands where he died in 1941 at the age of 82.

Each coin available here was struck between 1888 and 1915 and has survived for more than 100 years in Brilliant Uncirculated (BU) condition. This is your chance to hold a piece World War I-era history in your hands. Don’t miss making this historic coin a part of your collection.