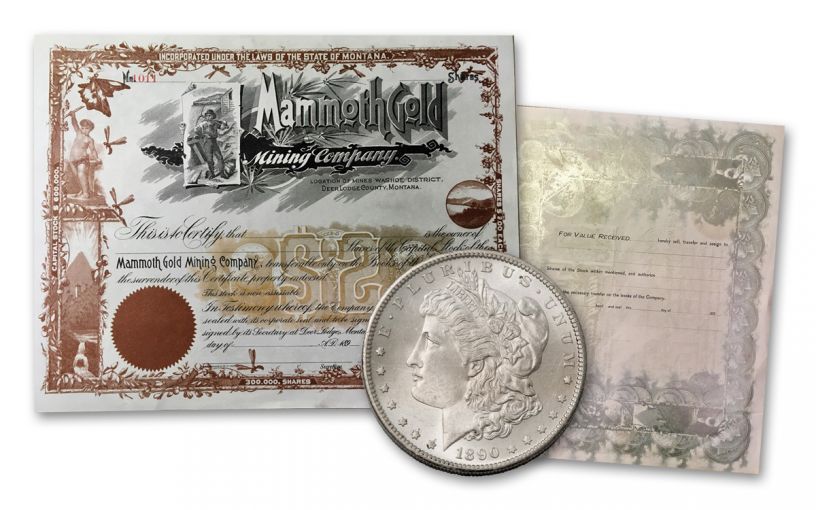 Availability: In Stock
This item will ship within 2 business days.
Item #
345123
CC Payments as low as
$97.50 / month
Add to Wish List Add to Wish List Wishlist is for registered customers. Please login or create an account to continue. Add to Compare

In the 1890s, mining was big business. BIG business!

All across the American West, prospectors armed with pickaxes, shovels and visions of finding that one big strike were going it alone or being put to work by newly-formed companies digging up the earth in search of precious metals. One company doing the digging was the Mammoth Gold Mining Company of Deer Lodge, Montana. Formed in 1890 by a group of Chicago investors who acquired the rights to the Mammoth Lode, the Mammoth Gold Mining Company in its heyday regularly employed 50 miners and helped spawn the town of nearby Coloma.

As business boomed for the company in the ’90s, Mammoth managers began thinking about how they could make even more money by selling stock in the operation. As plans progressed, they created, but never distributed, this beautiful 300,000-shares stock certificate. The front features an intricate design and a central image of a miner holding a pickaxe. The back depicts a number of U.S. silver coins, including an 1890 Morgan Silver Dollar. And what luck; we’ve matched that very coin – an 1890 Morgan Silver Dollar struck at the fabled San Francisco Mint – with a Mammoth Gold Mining Company stock certificate to create a complete two-piece set!

Both the 1890-S Morgan Silver Dollar and the Mammoth Gold Mining Company stock certificate come in crisp Uncirculated condition, so they look as fresh and colorful as they did when they were first produced nearly 130 years ago! It’s a fantastic piece of history from a halcyon period of America’s past.

This is your chance to step back in time to that era when vibrant cities seemingly popped up overnight. The aforementioned Coloma flourished in the 1890s thanks to the help of the Mammoth Gold Mining Company. By 1895, the company had constructed a boardinghouse, a company store, and a blacksmith shop in Coloma. There was also a general store, saloons, a meat market, a first-class restaurant and a post office. By the end of the decade, however, Mammoth began having financial trouble due to milling errors and mismanagement of funds. As Mammoth’s mining activities declined, Coloma dwindled in size and by the 1950s it had become a ghost town.

Don’t wait to add this set to your collection because you may not stand a ghost of a chance of securing it later! Click it to your cart today!