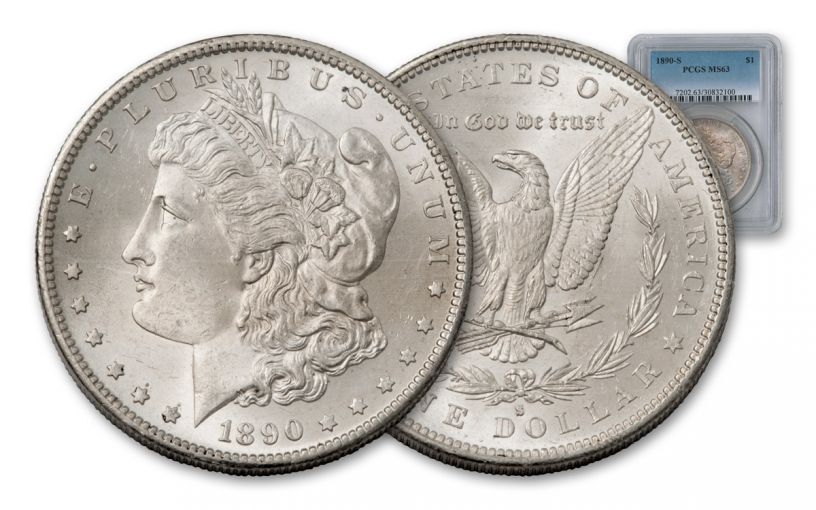 Availability: Out of Stock
This item is currently Out of Stock. Please sign up to be notified if this product becomes available.
Item #
341046
Add to Wish List Add to Wish List Wishlist is for registered customers. Please login or create an account to continue. Add to Compare

Historians declared the end of the great Western Frontier was in 1890, but these Wild West 90% Silver Dollars struck in San Francisco still jingled in the saddlebags of rugged cowboys, ranchers, and saloon keepers well into the 1900s. It’s known among Morgan collectors that no one struck coins as beautiful as the San Francisco Mint, making these 1890-S Morgans highly coveted. When you hold this hefty silver dollar with its sharp strike in your hands, you’ll understand why so many collectors seek out coins with the famous “S” mint mark for their collections.

Take a step into the final days of the American Wild West and secure this coin now certified by either the Numismatic Guaranty Corporation (NGC) or the Professional Coin Grading Service (PCGS) as being in Mint State-63 (MS63) condition. A coin as fine as this belongs only in the finest of collections. It’s estimated that as little as 15% of all Morgans still exist in any condition – and fewer still graded in a condition this nice. Combine that with its place in history and you have a piece of America’s past you can’t afford to miss! Add it to your cart today! Grading service varies.