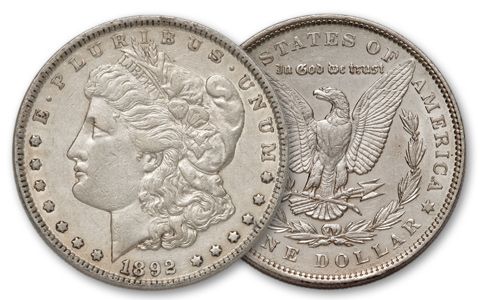 Availability: In Stock
This item will ship within 2 business days.
Item #
226539
Add to Wish List Add to Wish List Wishlist is for registered customers. Please login or create an account to continue. Add to Compare

Fate Doomed Me to a Hard Life!

I started my life as crisp and fresh as the bloom on a rose. There were just a million like me from Philadelphia. I was tucked away in a safe place, and I expected to still be there today, brand new. Then, the housing bubble burst and I was tossed into circulation. Things got worse in 1918 when most of us were thrown into the melting pot to get our silver to win World War I. It happened again in World War II. Today, almost none of us are left in Extremely Fine and About Uncirculated condition, and we could all be melted tomorrow to get our silver. Who am I? An 1892 Morgan Silver Dollar. Please. Save me before I disappear forever!