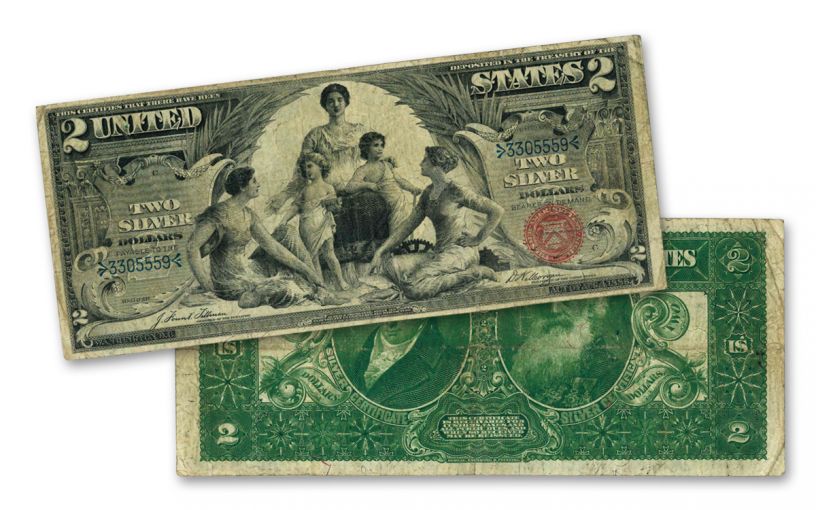 Availability: Call-In Only
This item is only available on a Call-In basis. Please call 1-800-510-6468 to speak to a representative.
Item #
342788
Add to Wish List Add to Wish List Wishlist is for registered customers. Please login or create an account to continue. Add to Compare

In 1896, the U.S. Treasury printed Silver Certificates with beautiful designs depicting educational motifs. Known as the “Educational Series,” each of these notes is a numismatic masterpiece. They’re also incredibly difficult to come by, which is why our buyer was so excited to locate these notes. We’ve managed to locate a $2 note depicting an allegorical figure of Science presenting Steam and Electricity to Commerce and Manufacture, paired with a reverse featuring Samuel Morse (inventor of the Morse code and telegraph) and steamship pioneer Robert Fulton!

Due to their theme, these notes became known as “Two Dollar Eds,” although in some circles they are known as “Fulton” or “Morse” notes in reference to the portraits of the two famous Americans on the back of the bill. Still, it’s the beautifully and intricately-engraved images on the front of the bill that are truly inspiring – making it arguably the most classically beautiful two-dollar bill ever printed! In the center is the allegorical figure of Science presenting two children, Steam and Electricity, to the more mature figures of Commerce on the left and Manufacture on the right. Issued just before the Turn of the Century, the novelty of Steam and Electricity was still new and their portrayals as youths, while Science, Industry, and Commerce are all mature women effectively illustrates where America was at that time regarding these new forms of power.

In the book 100 Greatest Currency Notes by Q. David Bowers, the $2 Educational Note is ranked #11. Why? Well, in 1896, while nearly 20 million Silver Dollars were minted – many of which still survive in high grade – only a few thousand of these Silver Certificate Educational Notes are left in ANY grade! A genuine treasure, this note comes in nice Very Fine (VF) condition. As only a small number of these notes are estimated to still exist, the time to secure yours is now! Your note will come secured in a large-size hard acrylic holder and accompanied by a certificate of authenticity. Click it to your cart today!