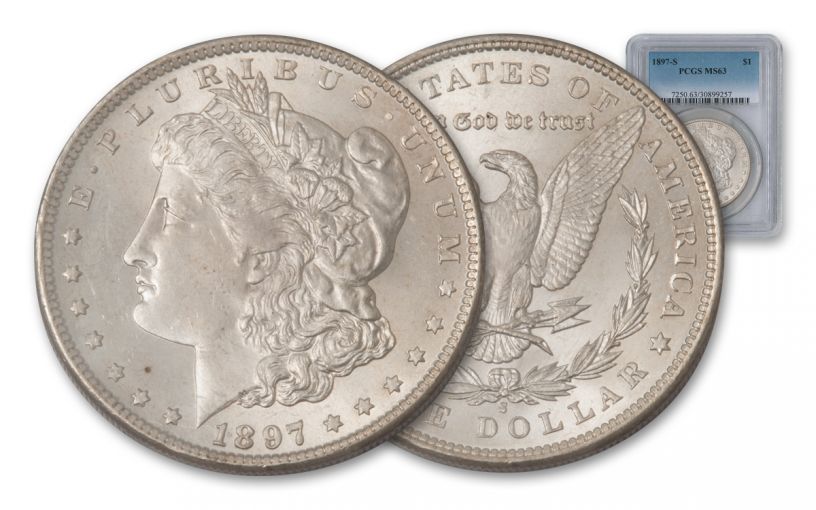 Availability: In Stock
This item will ship within 2 business days.
Item #
341573
Review this product
CC Payments as low as
$99.50 / month
Add to Wish List Add to Wish List Wishlist is for registered customers. Please login or create an account to continue. Add to Compare
Complete your collection with one of these:
Product Description

A Morgan from the Heyday of the Gay Nineties

The Gay Nineties was the last decade of America’s Gilded Age, an exciting era before the Turn of the Century. The peak of that halcyon age was 1897. President William McKinley was sworn into office, the Klondike Gold Rush attracted thousands of prospectors north to Canada’s Yukon Territory, and The Sun newspaper in New York City proclaimed, “Yes, Virginia, there is a Santa Claus.”

1897 also marked one of the final years that the U.S. Mint released Morgan Silver Dollars – among the most sought-after collector coins in America. Struck from silver mined from the legendary Comstock Lode, these 90% silver coins are becoming harder and harder to find today. These 1897-S Morgans are a perfect example. The combination of this date and mint mark is extremely hard to find on a Morgan Silver Dollar, partly because of mass meltings, and partly because many were immediately released into circulation. In fact, it’s estimated that as little as 15% of all Morgans still exist in any condition!

That’s why this coin is so impressive, graded as being in incredible Mint State-63 (MS63) condition by either the Professional Coin Grading Service (PCGS) or Numismatic Guaranty Corporation (NGC) – the country’s leading third-party grading services. Combine that with its place in history and you have a piece of America’s past you can’t afford to miss! Add it to your cart today! Grading service varies.