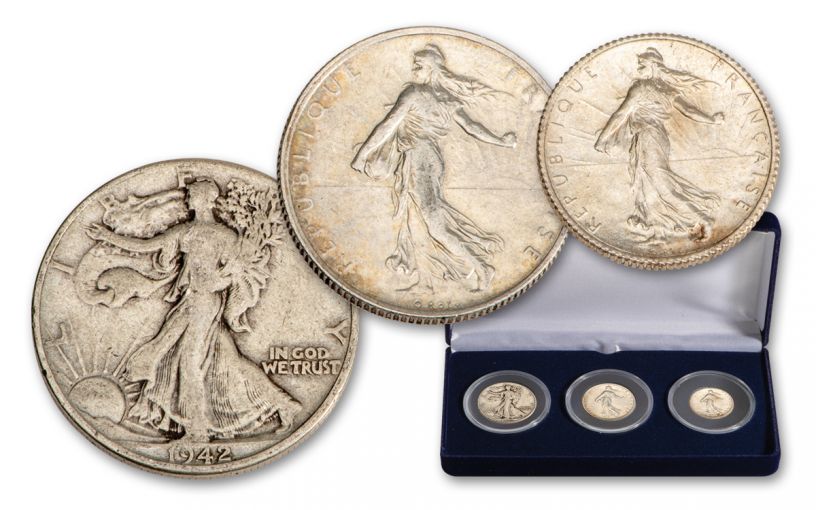 Availability: In Stock
This item will ship within 2 business days.
Item #
365488
Add to Wish List Add to Wish List Wishlist is for registered customers. Please login or create an account to continue. Add to Compare

The Inspiration for Walking Liberty?

You may not know who Louis Oscar Roty is, but you’re likely to recognize the most famous design created by this talented French medalist. Roty was the designer behind La Semeuse —The Sower, a design that was used in France on several coins, including the silver 1- and 2-Franc coins struck from 1897 to 1920.

Look familiar? It depicts Marianne, the French allegorical figure of Lady Liberty, sowing seeds before a background of beaming sunrays. By the time this design was retired, a similar design had popped up in America — Adolph A. Weinman’s famous Walking Liberty design that appeared on America’s Silver Half Dollars issued from 1916 to 1947. Some experts believe that Roty’s design served as Weinman’s inspiration.

Whatever the truth, you can compare and contrast the two designs with this three-coin set containing French 1-Franc and 2-Franc coins and a U.S. Walking Liberty Half Dollar. Dates vary and coins come in Fine to Very Fine (F–VF) condition.

Were these French coins the inspiration for America’s iconic Walking Liberty? You be the judge. Order your 1898–1947 France/USA Francs & Walking Liberty Three-Piece Set now!