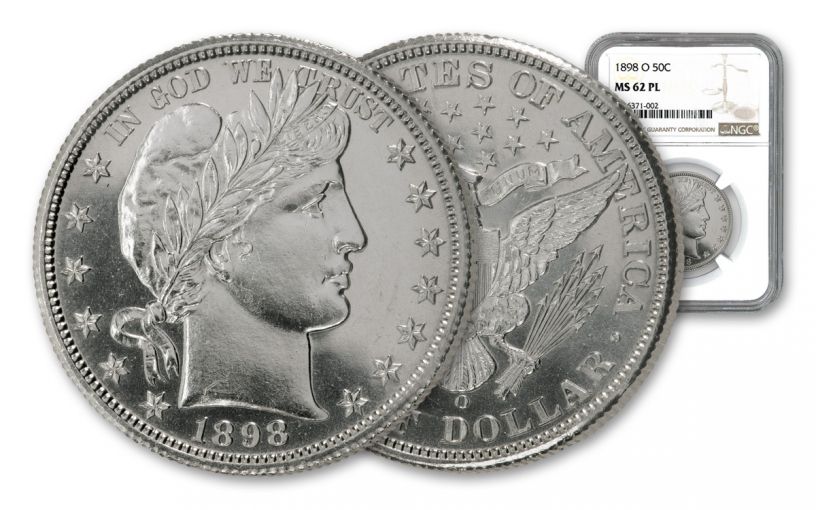 Availability: Call-In Only
This item is only available on a Call-In basis. Please call 1-800-510-6468 to speak to a representative.
Item #
337946
Add to Wish List Add to Wish List Wishlist is for registered customers. Please login or create an account to continue. Add to Compare

The Finest Barber You’ll Ever Know

Finding Barber Half Dollars in Proof-Like (PL) condition is no easy task. For the entire series, struck from 1892 to 1915, only 35 are known to exist! But our expert team scoured the Earth, and has managed to secure for you one of the finest examples known to still exist.

This 1898-O Silver Barber Half Dollar was struck during the Spanish-American War, and is just the second of its date and mint to be graded by the Numismatic Guaranty Corporation (NGC). With a fantastic grade of Mint State-62 Proof-:ike (MS62 PL) it is the second finest known, and is in stunning condition. The Smithsonian® has a coin graded Mint State-63 (MS63), just one grade higher, and that coin is not certified as Proof-like.

Think of all the vintage U.S. silver collectors that would love to get their hands on this coin. Of the 874,000 coins struck with the 1898 date and “O” mint mark at the New Orleans Mint, only two have ever surfaced in Proof-like condition. Secure this coin and only two of you in the entire world will be able to call this coin their own. That’s like being collector royalty!

Every world-class collector wants to own at least one or two coins that nearly no one else can say they own. It’s a rite of passage for the top-tier collectors in the world, and this coin gives you that ability. Don’t let this incredible opportunity pass you by – order now and become a giant among your fellow collectors!

This 1898-O Barber Half Dollar is the second-finest known coin of this date and mintmark known in existence. It’s a true treasure for any serious collector. Reserve it for your collection now!