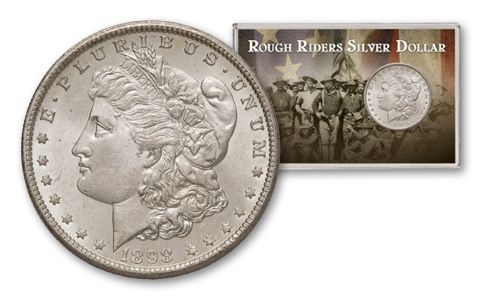 Availability: In Stock
This item will ship within 2 business days.
Item #
239071
Add to Wish List Add to Wish List Wishlist is for registered customers. Please login or create an account to continue. Add to Compare

Theodore Roosevelt burst onto the national scene in 1898 when he led his "Rough Riders" up San Juan Hill and won the Spanish American War. Meanwhile, the New Orleans Mint was striking these big beautiful 1898-O Morgan Silver Dollars. This special coin shares two things that Americans love: Great history and great big Morgan Silver Dollars. For decades, this coin was one of the scarcest and most expensive Morgans of all. Then, the Treasury released bags of the coins in the 1960s, allowing today's collectors to own this famous coin in Brilliant Uncirculated (BU) condition. Each is 90% silver and 100% American. Get yours today!