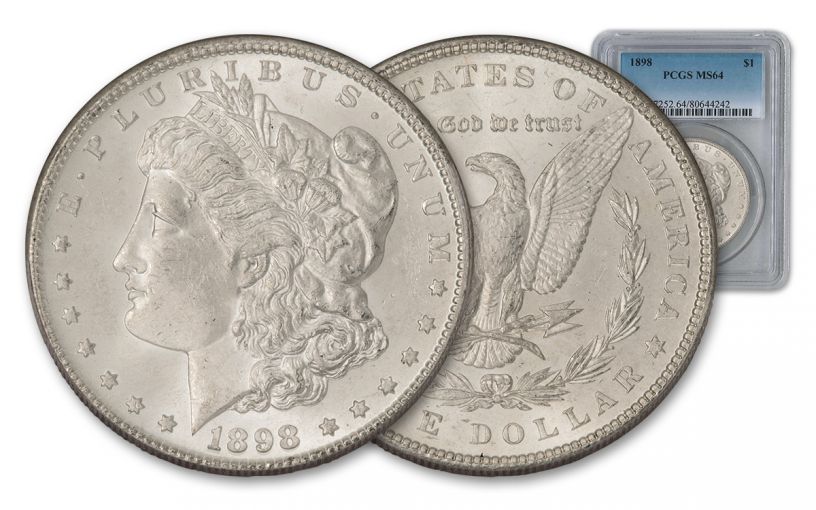 Availability: In Stock
This item will ship within 2 business days.
Item #
294987
Add to Wish List Add to Wish List Wishlist is for registered customers. Please login or create an account to continue. Add to Compare

Amid the Raging Spanish-American War, this Morgan Lives to Shine Another Day!

The Spanish-American War, a fierce engagement that lasted from April through August of 1898, was only one of many conflicts fought throughout the late 1800s and the twentieth century. But while subsequent wars would contribute to the extreme depletion of the famed Morgan Silver Dollar series, 1898 was actually a banner year for the coin, particularly those struck at the Philadelphia mint. Considered one of the best years of quality for Philadelphia Morgans, these coins are even more remarkable because they survived numerous subsequent government meltdowns to help fund various war efforts. Now, these Philly Morgans can finally make their way to your collection!

Designed by George T. Morgan, 7th Chief Engraver of the U.S. Mint, the coin's obverse features Lady Liberty surrounded by a circle of stars, along with the inscriptions "LIBERTY," "E PLURIBUS UNUM" and the date 1898. On the reverse of the coin, an eagle soars with outstretched wings, holding an olive branch and arrows in its talons. It's inscribed with "UNITED STATES OF AMERICA," "ONE DOLLAR" and the phrase "IN GOD WE TRUST" in archaic lettering. With a grade of MS64 by Professional Coin Grading Service (PCGS), this is a particularly beautiful coin with extremely few marks -- even more highly desirable than most coins from 1898 given that it was struck at the Philadelphia mint. See this 1898 Morgan for yourself by securing one today!