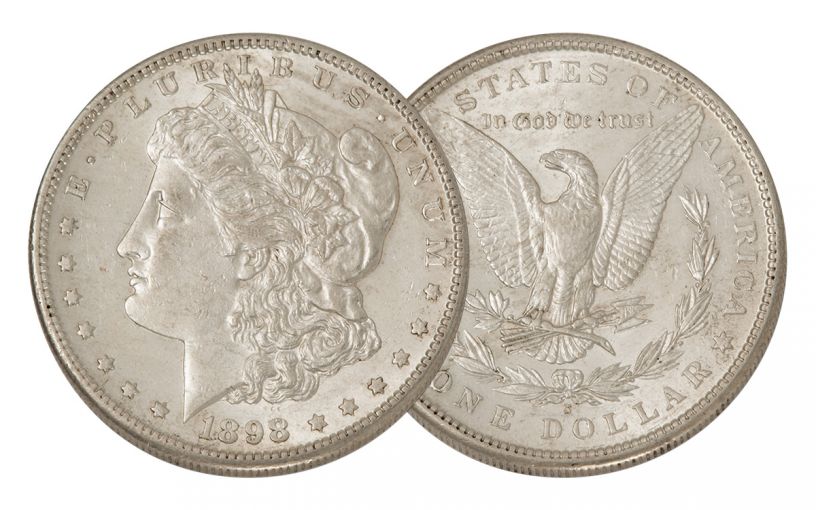 Availability: Out of Stock
This item is currently Out of Stock. Please sign up to be notified if this product becomes available.
Item #
302634
Add to Wish List Add to Wish List Wishlist is for registered customers. Please login or create an account to continue. Add to Compare

The coin was made possible by the discovery of the Comstock Lode Silver deposit in Nevada in the 1850s. With all the new silver available, congress authorized the largest striking of Silver Dollars ever in U.S. History. The new coin, designed by mint engraver George T. Morgan, quickly became know as the Morgan Silver Dollar. They were struck in 90% Comstock Lode silver and hundreds of millions were minted between 1878 and 1921. These big silver coins become part and parcel of the Wild, Wild West, with gamblers stacking them high on poker tables and outlaws robbing trains and banks to get them.

You might think a Morgan Dollar with over 4 million minted might be easy to find today, but that's not true for the 1898-S. Today the 1898-S Silver Dollar is harder to find than many San Francisco Mint Silver Dollars. This could be because many were immediately released into circulation. And in fact, just one grade higher than the coin offered here, it's valued more than twice as high. Don't wait. Call to secure this superb example before it disappears!

Your Morgan Dollar comes in a numismatic flip and includes a certificate of authenticity.