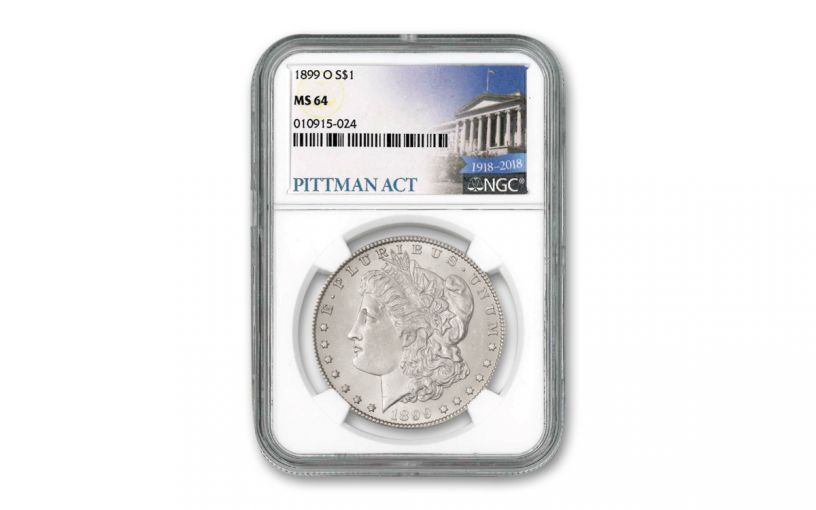 Availability: Out of Stock
This item is currently Out of Stock. Please sign up to be notified if this product becomes available.
Item #
356537
Add to Wish List Add to Wish List Wishlist is for registered customers. Please login or create an account to continue. Add to Compare

In 1899, 11.87 million Morgan Silver Dollars were struck at the fabled New Orleans Mint – barely half of what was struck at the Philadelphia Mint. Just 15 years later, Congress passed the Pittman Act, calling for the melting of hundreds of millions of these hefty silver coins. This may be one of the reasons why, for such a long time, it was so difficult to hunt down one of these 1899-O Morgans.

During its lifetime, the New Orleans Mint earned a less-than-stellar reputation for producing coins of mediocre quality. That’s why when coins such as these well-struck coins become available, they are highly prized by coin collectors. In fact, each 1899-O Morgan Silver Dollar available in this offer has been graded by the Numismatic Guaranty Corporation (NGC) as being in high-grade Choice Uncirculated Mint State-64 (MS64) condition.

Morgans of this date, mint mark and grade are very scarce. That’s why we’re so excited to have secured a small cache of Morgan Silver Dollars that survived the Pittman Act – and more than a century – in high-grade Brilliant Uncirculated condition. What’s more they’re among the last silver dollars struck at the fabled New Orleans Mint, the only U.S. Mint branch to be controlled by three different governmental bodies! This coveted 1899-O Morgan Silver Dollar will also come encapsulated in an acrylic holder with an exclusive Pittman Act label.

The storied Morgan Silver Dollar is perhaps the most coveted silver dollar in the world – and the 1899-O Morgan was once one of the most sought-after coins ever struck in the series. Don’t miss out! Secure your key-date and mint mark Morgan now before it fades away forever!

The total amount of Morgan Silver Dollars has seen significant evaporation into both collections and the melting pot. Once our supply of these key-date 1899 O-Mint Morgans disappears, it might be gone for good. Don't wait any longer to secure yours now!