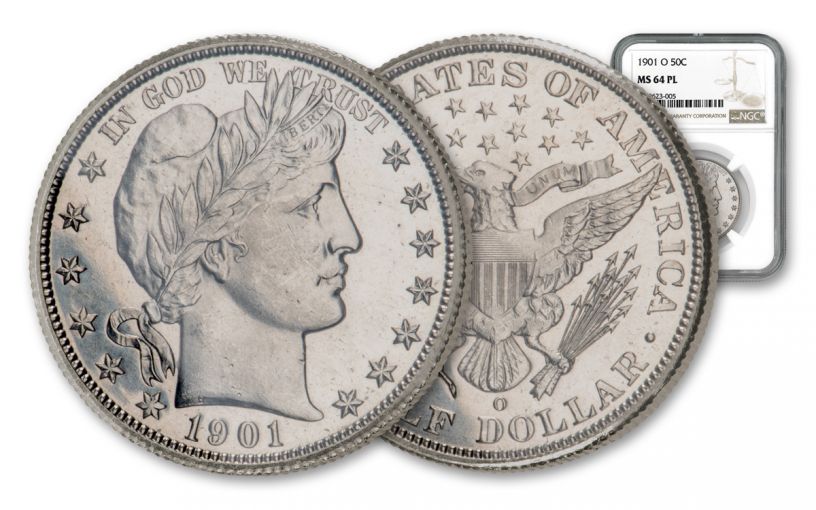 Availability: In Stock
This item will ship within 2 business days.
Item #
350454
CC Payments as low as
$4,375.00 / month
Add to Wish List Add to Wish List Wishlist is for registered customers. Please login or create an account to continue. Add to Compare

Wow! When one of our numismatists looked at this remarkable coin, he was floored. In his own words, “It looks like a Silver Eagle!” That’s because it features an absolutely phenomenal strike and amazing luster that’s so brilliant you almost need sunglasses to look at it.

But this is no Silver Eagle; it’s a Barber Silver Half Dollar struck in 1901 at the New Orleans Mint. The coin is so fabulous that not only has it been certified and graded by the Numismatic Guaranty Corporation (NGC) as being in Choice Uncirculated Mint State-64 (MS64) condition, but NGC also added a special Proof-Like (PL) designation to it as well! That means that even though this coin wasn't struck as a proof, its brilliant and reflective finish has earned it this special designation.

So don’t wait; this coin will not be available for long. Secure it now for your collection and you’ll have bragging rights for years. A finest known, one-and-only museum-worthy coin!

This 1901-O Barber Half Dollar is a true treasure for any serious collector. Reserve it for your collection now!