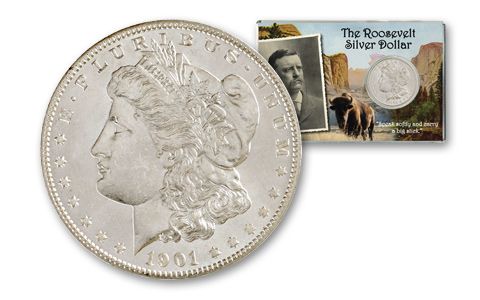 Availability: In Stock
This item will ship within 2 business days.
Item #
183515
Add to Wish List Add to Wish List Wishlist is for registered customers. Please login or create an account to continue. Add to Compare

The contribution President Theodore Roosevelt made to U.S. coinage is immeasurable. While he's famous for commissioning new Saint - Gaudens gold coin designs, the 1901 New Orleans Morgan Silver Dollar was actually the first U.S. coin struck during his presidency. It was right at the end of the first mintage of Morgan Silver Dollars, and can be very hard to find today in the Brilliant Uncirculated condition you get here. It's a beaut! Each comes in a custom 4" by 6" display case. Get yours now!