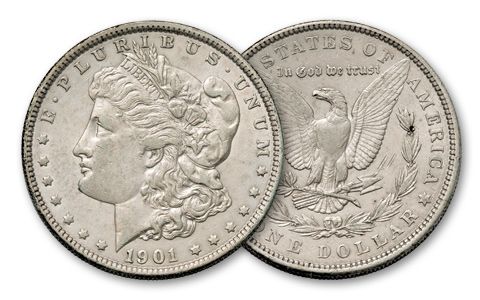 Availability: In Stock
This item will ship within 2 business days.
Item #
184416
CC Payments as low as
$79.50 / month
Add to Wish List Add to Wish List Wishlist is for registered customers. Please login or create an account to continue. Add to Compare
Recommended Products
Product Description

Get One of the Scarcest Morgans of All!

Some Morgan Silver Dollars are much harder to find than others. The 1901 Morgan from Philadelphia is one of the ten scarcest dates in the series. Why? Well, nearly every one was released into circulation where they wore down in commerce. Very few survive in grades above Fine. In uncirculated grades, they sell for $2,000 or more each. Knowing how hard they are to find, we've acquired a small lot of better grade Very Fine and Extremely Fine 1901-P Morgans, and we are now releasing our entire stock to you. Don't miss this opportunity. It may not come around again.