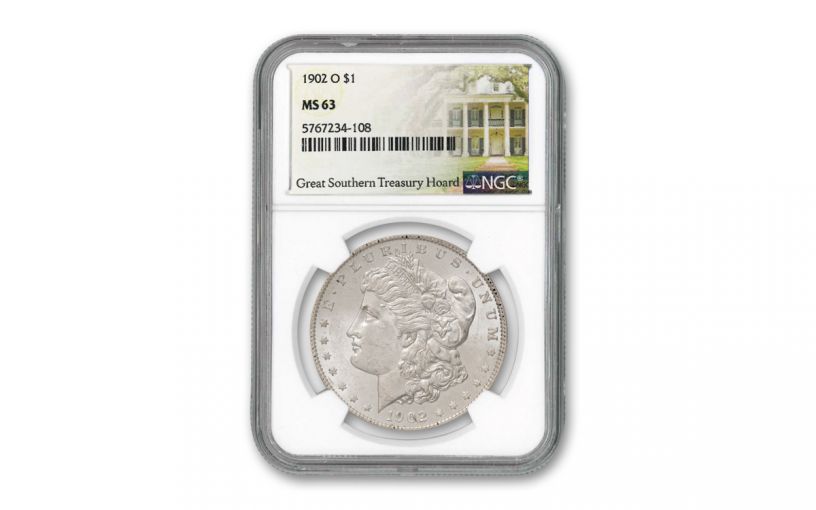 Availability: Out of Stock
This item is currently Out of Stock. Please sign up to be notified if this product becomes available.
Item #
362761
Add to Wish List Add to Wish List Wishlist is for registered customers. Please login or create an account to continue. Add to Compare

As you can imagine, these coins are extremely limited, so don’t wait; secure your piece of this fantastic discovery by adding this 1902-O Morgan Silver Dollar from the Great Southern Treasury Hoard to your cart right now!

THE GREAT SOUTHERN TREASURY HOARD – This coin hails from the massive Great Southern Treasury Hoard. The hoard consisted 13,000 Morgan Silver Dollars acquired during the Treasury Hoard releases of the early 1960s. This collection was amassed by a man bent on stockpiling cold hard currency as a hedge against financial ruin and all the coins in his collection were struck at the New Orleans Mint.

AMERICA’S MOST POPULAR COIN – The Morgan Silver Dollar – so named for its designer, U.S. Mint Assistant Engraver George T. Morgan – has stood the test of time. Struck from 1878-1904 and again in 1921, it was the coin of America’s “Wild West” and jingled in the coin purses of gamblers, gunfighters, soldiers and dance hall girls.

CLASSIC DESIGNS – Morgan’s historic design depicts a profile of Lady Liberty on the obverse while the reverse features an eagle with outstretched wings. The model used for Liberty was Miss Anna Williams of Philadelphia, who Morgan declared to have the most perfect feminine profile he had ever seen.

STRUCK IN GLEAMING AMERICAN SILVER – Struck in 26.73 grams of 90% silver from the famous Comstock Lode, the Morgan Silver Dollar is a big coin measuring 38.1 mm in diameter.

LEGAL TENDER SILVER DOLLAR – Morgans were $1 legal tender and struck during the heyday of America’s Wild West era where coins were overwhelmingly preferred over paper currency.

SPECIAL PEDIGREED LABEL – Your coin will be encapsulated in an acrylic coin holder with special “Great Southern Treasury Hoard” label.

THE CASE OF THE DISAPPEARING MORGANS – While millions of Morgan Silver Dollars were struck from 1878 through 1921, massive silver meltings and the ravages of time have taken their toll. Today coin experts believe that only 15% of all Morgans ever struck remain in existence!

Get a piece of the Great Southern Hoard of Morgan Silver Dollars from the original U.S. Treasury Hoard with this 1902-O New Orleans Mint Morgan in gorgeous Choice Uncirculated condition and pedigreed by NGC as being from this amazing hoard!