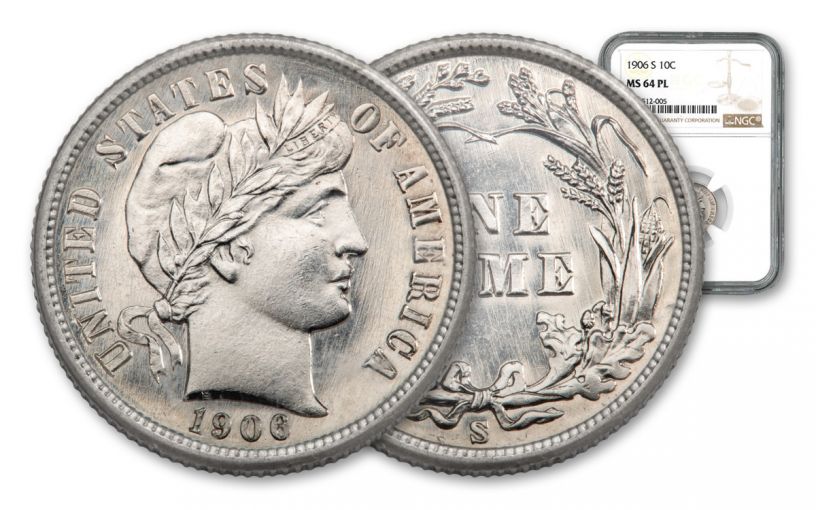 Availability: Out of Stock
This item is currently Out of Stock. Please sign up to be notified if this product becomes available.
Item #
346449
Add to Wish List Add to Wish List Wishlist is for registered customers. Please login or create an account to continue. Add to Compare

Struck from 1892 to 1916, the Barber Dime sat in the pockets of thousands of immigrants who had entered the country through Ellis Island, as well as soldiers fighting in both the Spanish-American War and World War I.

Struck in 90% silver, they were designed by the U.S. Mint’s 6th Chief Engraver Charles Baber and featured Lady Liberty with her hair tucked up under her cap, ready to get to work. The design was inspired by Greek, Roman and 19th century French coinage – and it was so popular that it also appeared on both the quarter and half-dollar of this period!

This particular coin is a rare 1906-S Barber Dime hails from the San Francisco Mint, a branch mint that many people believe produced some of the most beautiful U.S. coins ever struck. You’d be hard-pressed to argue that point when you get a look at this masterpiece. In fact, this coin is so beautiful that it has been certified and graded by the Numismatic Guaranty Corporation (NGC) as being in gorgeous Mint State-64 Prooflike (MS64 PL) condition. This is the only Prooflike coin graded by NGC, making it the finest known to exist! In fact, over the entire 24-year run of Barber Dimes, just 52 coins have been certified as being in Prooflike condition by NGC.

What is it like to own a “finest known” vintage U.S. coin? There’s only one way to find out – secure this beautiful piece for your collection now!

Own the finest-known Barber Dime struck by the San Francisco Mint in 1906 with this beauty certified and graded by NGC as being in gorgeous Mint State-64 Prooflike condition. Don’t miss this chance to make it part of your collection, order it today!