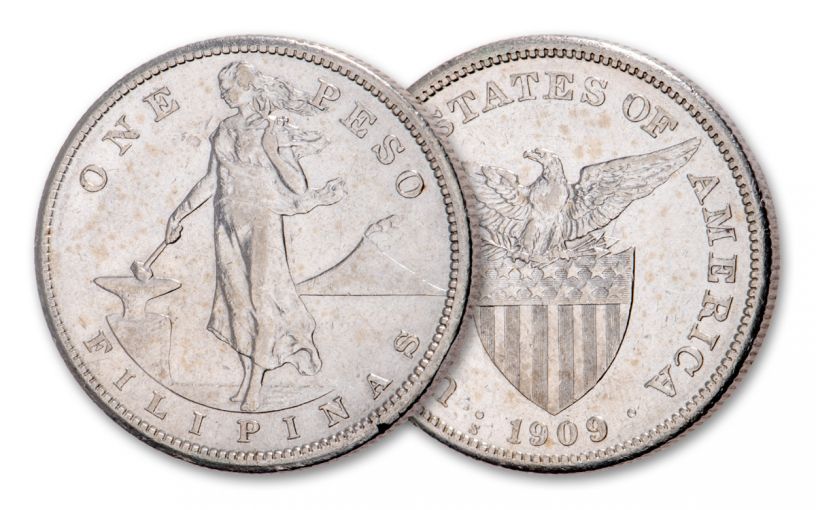 Availability: In Stock
This item will ship within 2 business days.
Item #
344080
Add to Wish List Add to Wish List Wishlist is for registered customers. Please login or create an account to continue. Add to Compare

After taking control of the Philippine Islands following its victory in short Spanish-American War, the United States successfully put down a guerilla insurgency there during the Philippine-American War of 1899-1902. To help rebuild the Filipino economy, the San Francisco Mint at the request of President Theodore Roosevelt struck silver Pesos that were compatible with the old Spanish issues yet could be legally exchanged for American currency. Struck from 1903-1912, these coins were exchanged at the rate of two Philippines pesos for one American dollar.

These coins are fascinating pieces of American history from an era when Roosevelt’s “Gunboat Diplomacy” elevated the United States to the status of a global power. That’s why when we recently received first right of refusal on a magnificent 200-piece hoard of those Philippines Peso coins ranging in dates between 1907 and 1912 we immediately said yes!

The obverse of each coin features Liberty striking an anvil – a symbol of America’s aid in helping the Philippines rebuild – along with the denomination ONE PESO and FILIPANAS – Spanish for the Philippines. The reverse design shows an eagle over an American shield, with the year date and the words UNITED STATES OF AMERICA. Each coin was struck in 80% silver coin to help facilitate the exchange rate between Filipino and American currency. In addition, these coins come in Extremely Fine (XF) to About Uncirculated (AU) condition. Date varies.

Today, more than 110 years since he left office, President Teddy Roosevelt is still regarded as one of the five best presidents in U.S. history. Asked to describe his style of foreign policy, Roosevelt responded by saying, “Speak softly and carry a big stick, and you will go far!” By the end of his second term he had put those words into action, increasing the size of the navy so that it had more battleships than any other country in the world except Great Britain. He also valued peace and was awarded the Nobel Peace Prize for negotiating a peaceful resolution to the Russo-Japanese War and strengthened relations with Great Britain to such a degree that the two countries have remained strong allies ever since.

And one of the historic coins to your collection – no U.S. coin collection will be complete without it!

America struck another country’s coins? It happened – and now you can get one of them with this Philippines One Peso Teddy Roosevelt Silver Dollar. Secure yours today!