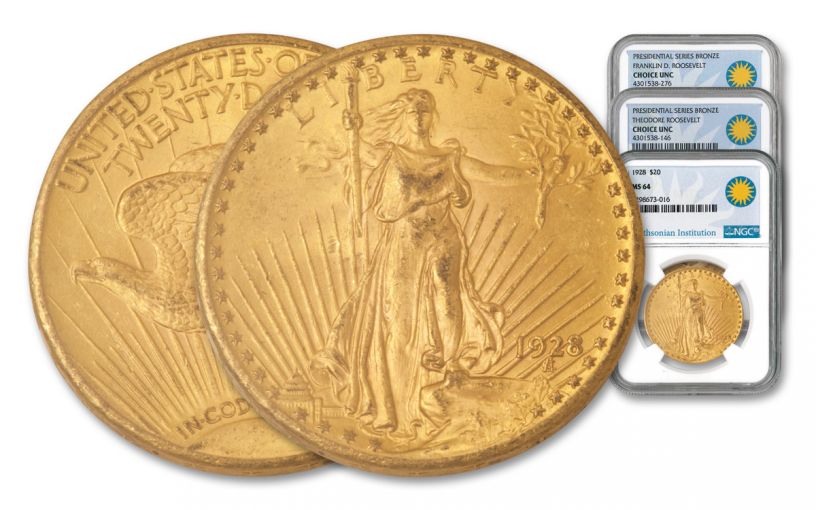 Availability: Call-In Only
This item is only available on a Call-In basis. Please call 1-800-510-6468 to speak to a representative.
Item #
354061
Add to Wish List Add to Wish List Wishlist is for registered customers. Please login or create an account to continue. Add to Compare

The Smithsonian® is recognized around the world for its incredible collection of items that are rich in historic and cultural significance. With 21 libraries, 19 museums, nine research centers, a zoo and affiliates around the nation, the Smithsonian is the largest museum, education and research complex in the world. One of those museums is the fantastic National Numismatic Collection in Washington, D.C., a diverse and expansive collection of monetary and transactional objects.

Venture into these hallowed halls and you’ll find a number of beautiful $20 Gold Saint-Gaudens Double Eagles, displaying what many consider to be the most beautiful design to ever grace an American coin. This design comes courtesy not only of American sculptor Augustus Saint-Gaudens, but also of President Teddy Roosevelt, who hired the designer in an effort to redesign and improve America’s coinage.

To pay tribute to this beautiful coin and the history surrounding it, we’ve assembled this special three-piece set. It starts with an actual Saint-Gaudens $20 Double Eagle struck between 1907 and 1928 (dates will vary) that has been certified by the Numismatic Guaranty Corporation (NGC) as being in Choice Uncirculated Mint State-64 (MS64) condition. It will also come sonically sealed in an acrylic capsule and encapsulated with an exclusive Smithsonian label.

The next two pieces in your set are both Roosevelt-related. They’re a pair of official U.S. Presidential Series Bronze Medals – one depicting President Theodore Roosevelt and the other President Franklin D. Roosevelt – both in Choice Uncirculated condition and sealed in matching capsules with Smithsonian labels. The reason for including Teddy Roosevelt is clear, but why FDR you ask? Simple: It was the younger Roosevelt who signed Executive Order 6102 in 1933, requiring all persons to deliver on or before May first of that year all the gold they owned. This recall resulted in many of these gorgeous coins being melted down for their precious metal.

Luckily, some of these “Saints” escaped the fiery depth of the nation’s melting pots. Make this trio of historic pieces a part of your collection and secure one of these sets now – but you’ll need to be quick; just seven are left in our vault and they won’t last for long!

Pay tribute to America’s most beautiful coin and the men who were there at the beginning and end of its run. Order your $20 Gold Saint-Gaudens w/Roosevelt Medals Smithsonian Classics Three-Piece Set today!