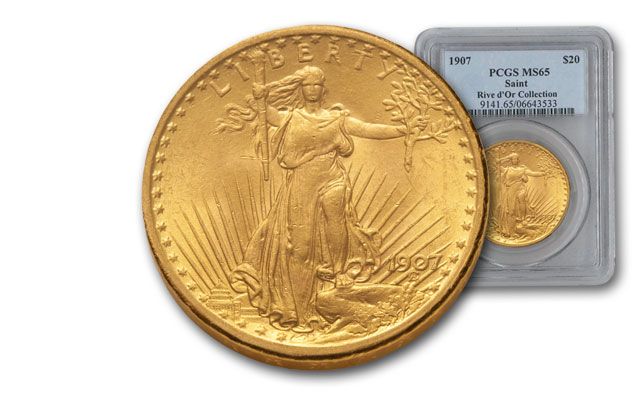 Availability: Out of Stock
Discontinued Product
Item #
244859
Add to Wish List Add to Wish List Wishlist is for registered customers. Please login or create an account to continue. Add to Compare

Between the two World Wars, millions of dollars in U.S. aid were shipped to Europe in the currency of the day: gold coins. Astute Europeans who obtained these valuable coins often chose to lock them away in bank vaults - especially after the U.S. government's confiscation of gold in 1933.

When gold became legal to own again in 1974, many of these hoards were opened and snatched up by collectors. By the 1980s, the era of European gold hoards appeared to be ending. That's what makes the Rive d'Or so significant. Originating in Paris, France, it is considered the most significant U.S. gold coin hoard in decades. It could very well be the last of the great European gold hoards from the 1930s. We are proud to feature some truly exceptional gold coins on these pages—but the hoard also contained a variety of other scarce and precious pre-1933 U.S. gold coins. Please call today to discover even more great coins from the Rive d'Or Collection!

The greatest coins in history were born from an indelicate curse muttered under the breath of President Teddy Roosevelt. In January of 1905, Roosevelt was touring the Smithsonian Institution and was shown an exhibit of ancient Greek and Roman coins. As he beheld the stunning sculptural relief achieved by ancient artisans over 2000 years earlier, Roosevelt suddenly stopped in his tracks. His hand slipped into his vest pocket to finger the flat, uninspiring coins of his own U.S. government - and a frustrated curse slipped out.

From that moment on, Roosevelt was determined to bring about a renaissance in U.S. coinage. The greatest nation in the world, he said, deserved the finest coin designs the world had ever seen. To achieve his goal, he sought out the greatest living American sculptor, Augustus Saint-Gaudens. Working together on what Roosevelt called "my pet crime"; the two great men soon unveiled a gold masterpiece: the Saint-Gaudens $20 Gold Double Eagle coin.

First issued in 1907, the Saint-Gaudens Gold Double Eagle quickly earned the title of the most beautiful coins in history. Their massive gold weight and 90% purity made them the storehouses of wealth for the Rockefellers, Carnegies, Tiffanys, and J.P. Morgans of the early 20th century. Now, you can make it yours!