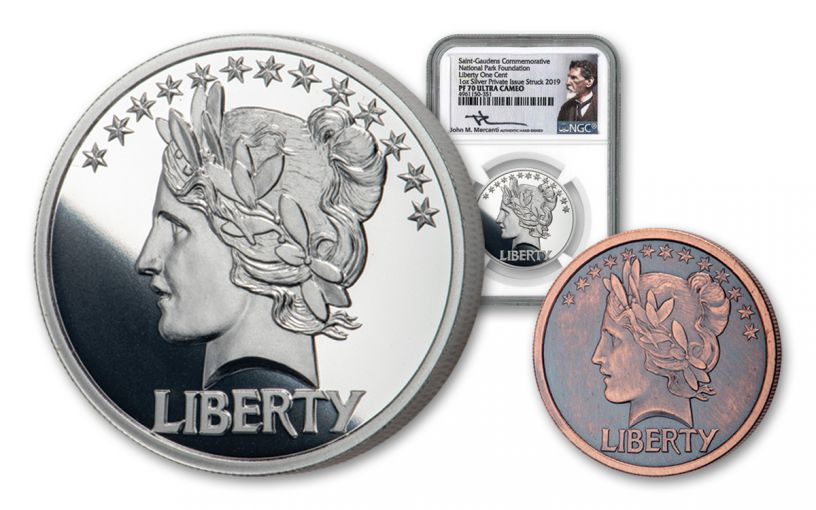 Availability: Call-In Only
This item is only available on a Call-In basis. Please call 1-800-510-6468 to speak to a representative.
Item #
349191
Add to Wish List Add to Wish List Wishlist is for registered customers. Please login or create an account to continue. Add to Compare

When President Theodore Roosevelt commissioned Augustus Saint-Gaudens to redesign all of America’s coinage, the famed master sculptor completed only three designs before his untimely passing in 1907 – the $20 Gold Double Eagle, the $10 Gold Indian, and an unreleased Bronze Cent. Now, for the very first time, a new series of officially licensed proofs has been released that pays tribute to “the coin that never was” – the last coin of Saint-Gaudens.

Officially licensed by the National Park Foundation, each proof was struck in a full ounce of highly-pure 99.9% silver to beautifully capture the genius of Saint-Gaudens in a way the master himself could only have dreamed of. The obverse features a profile of Lady Liberty wearing a wreath of laurel leaves – a profile later given a feathered headdress and used for the $10 Gold Indian. The reverse displays the words ONE CENT and UNITED STATES OF AMERICA encircled by laurel leaves above the dual dates of 1907 and 2019. At 32 mm in diameter, it’s slightly larger than a U.S. Half Dollar, a size that allows the viewer to see all the exquisite designs Saint-Gaudens intended for his one-cent coin.

It took a monumental effort to bring this fabulous masterpiece to life, and it couldn’t have been in any better hands than those of John Mercanti, the now-retired 12th Chief Engraver at the U.S. Mint. Using Saint-Gaudens’ original sketches, plasters and letters to President Roosevelt, Mercanti painstakingly recreated the designs used for these proofs to resurrect Saint-Gaudens’ final design. The result is a superb showcase to the Saint-Gaudens coin design that was never used… until now!

Each Last Coin of Saint-Gaudens One-Ounce Silver Proof was expertly crafted from hand-selected planchets, polished dies and multiple strikes to produce beautifully frosted details rising over mirror-like fields. Plus, each proof available in this offering has been graded by the Numismatic Guaranty Corporation (NGC) as being in flawless Proof-70 Ultra Cameo (PF70UC) condition, a distinction that means your perfectly-graded proof will have ZERO imperfections – showing all features and fields exactly as the engraver and mint intended! In addition, your proof will come sonically sealed in an acrylic holder with a label bearing the official authorization of the Saint-Gaudens National Historical Park and National Park Foundation. To top it off, each label was personally signed by John Mercanti – the man who brought The Last Coin of Saint-Gaudens to life!

You will also receive a mint-issued Certificate of Authenticity and a fact-filled storycard. And, as an added bonus, each proof comes with a tenth-ounce copper-nickel medallion struck to the same diameter as a U.S. Cent. Bearing Saint-Gaudens’ final design, it has been given a special antiqued finish to make it look like a vintage penny. Just think; if Saint-Gaudens had lived even six more months, this could have been the penny in your pocket!

Only 2,500 of these one-ounce silver proofs have been officially authorized by the National Park Foundation on behalf of the Saint-Gaudens National Historical Park. Can you believe it… just 2,500? That number virtually screams “sell-out!” Don’t get left empty-handed; secure your 1907-2019 Last Coin of Saint-Gaudens One-Ounce Silver Proof today!

Hold “the coin that never was” in your hands with this special 1907-2019 Last Coin of Saint-Gaudens One-Ounce Silver Proof. It’s an absolute must-have for any Saint-Gaudens collection!