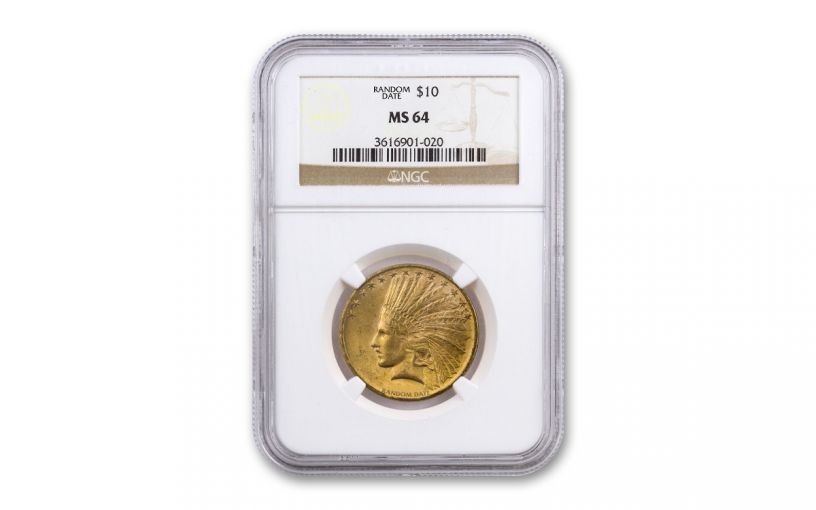 Availability: In Stock
This item will ship within 2 business days.
Item #
365377
CC Payments as low as
$643.75 / month
Add to Wish List Add to Wish List Wishlist is for registered customers. Please login or create an account to continue. Add to Compare

American Gold Masterpiece – Brought to You by A Rough Rider and A Sculptor!

One of the greatest coins in history was born when President Theodore Roosevelt sought out the greatest living American sculptor, Augustus Saint-Gaudens, and commissioned him to redesign the U.S. $10 Gold Eagle. Roosevelt thought our nation's gold coins needed to reflect the newly found power the United States had gained on the world stage. Working together, the two great men soon unveiled this stunning gold masterpiece: the Saint-Gaudens $10 Gold Eagle.

The coin features a bold Indian in a spectacular headdress and a defiant Eagle ready to fight. Struck by the U.S. Mint through World War I, Prohibition and the early years of the Great Depression, the coin was a cornerstone of commerce. The coins available in this offer are all dated between 1908 and 1932 (date varies) and contain 16.718 grams of highly pure 90% fine gold. Plus, each has been graded by either the Numismatic Guaranty Corporation (NGC) or the Professional Coin Grading Service (PCGS) as being in beautiful Choice Uncirculated Mint State-64 (MS64) condition. These coins display full strikes and no severe marks or hairlines.

Very few of these original Saint-Gaudens $10 Gold Indians have survived and remain in existence today thanks to America going off the gold standard in 1933, which resulted in massive hoards of these coins being ruthlessly melted in the 1930s. And when it comes to the two coins that Roosevelt and Saint-Gaudens collaborated on – the $10 Gold Indian and the $20 Double Eagle, considered the most beautiful American coins ever minted – they had incredibly different mintages. While the $20 Double Eagle has a mintage of about 68 million coins, the $10 Gold Indian had a total mintage of about 13 million coins – five times more scarce than the $20 coin! And of those 13 million coins struck between 1908 and 1932, less than 1% have received a grade of MS64 by NGC or PCGS. Less than 1%!

Seize this opportunity to add this fabulous golden tour de force to your family's personal history; future generations – and you yourself – will thank you for it!

Take advantage of this offer and build a golden legacy for your children, grandchildren and heirs. Click one of these popular, high-quality, and scarce collectible gold pieces to your cart right now!