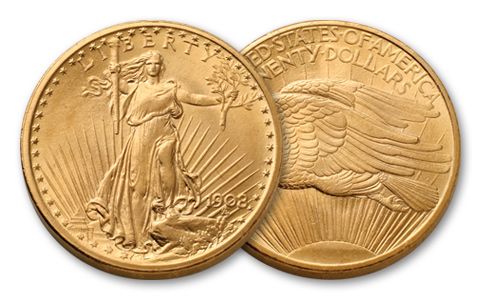 Availability: Out of Stock
Discontinued Product
Item #
222444
Add to Wish List Add to Wish List Wishlist is for registered customers. Please login or create an account to continue. Add to Compare

Rough Rider President Teddy Roosevelt commissioned the redesign of America's gold coins by famed sculptor Augustus Saint-Gaudens. When the coins were released in 1908, a public protest ensued because the motto "In God We Trust" did not appear on the new coins! It was added later, making these "godless" 1908 No Motto $20 Gold Dollar Double Eagles highly sought after by collectors ever since. Today, they are difficult to find in the Brilliant Uncirculated condition we are offering. Housed in a deluxe presentation case, each is struck in 33.436 grams of 90% gold.