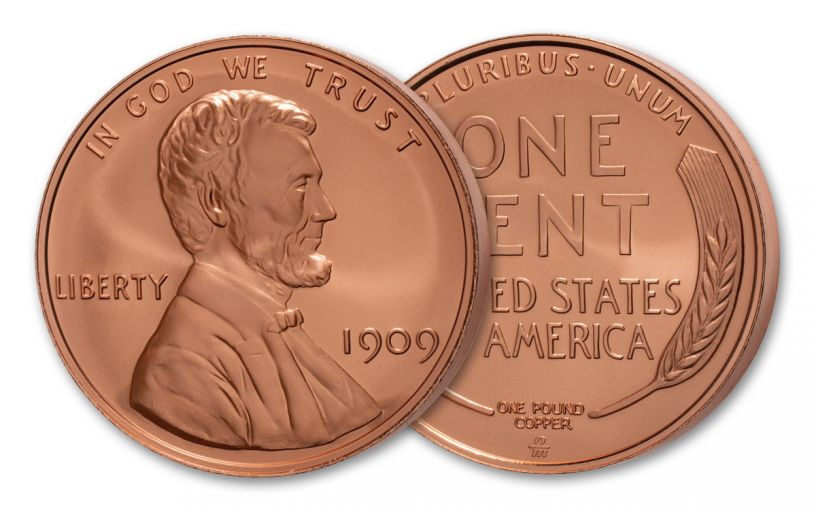 Availability: In Stock
This item will ship within 2 business days.
Item #
351819
Add to Wish List Add to Wish List Wishlist is for registered customers. Please login or create an account to continue. Add to Compare

Here’s a fun chance to collect one of the most popular coins in United States history as a unique, massive replica. It’s the first-year 1909 Lincoln Wheat Cent struck in one Troy pound of copper! At three-and-a-half-inches diameter, this huge tribute round is larger than a baseball! Plus, this fantastic piece of numismatic artistry features a cameo finish with a polished background and a frosted design.

Since its debut in 1909 through today, the Lincoln Cent has been a staple of pocket change in the United States right up to this very day. Struck continuously for more than 110 years, the Lincoln Cent is the United States’ longest-serving coin. And for the first 50 years it was issued from 1909 to 1958, the Lincoln Cent famously featured two stalks of wheat on its reverse on either side of the coin’s denomination. These “Wheatback Cents” are among the most popular vintage U.S. coins ever struck and served as the gateway into coin collecting for many of us. Designed by Victor David Brenner, it was originally issued as a tribute to the 100th anniversary of President Abraham Lincoln’s birth.

Each One-Pound Copper 1909 Lincoln Wheat Cent Replica will come housed in a protective capsule, perfect for display in your home or office. Click one of these impressive tribute rounds to your cart today!