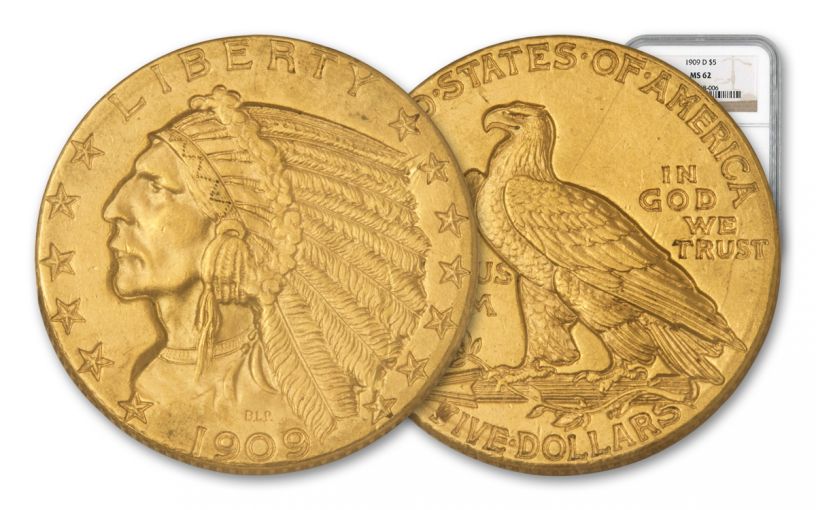 Availability: Out of Stock
This item is currently Out of Stock. Please sign up to be notified if this product becomes available.
Item #
286911
Add to Wish List Add to Wish List Wishlist is for registered customers. Please login or create an account to continue. Add to Compare

From Bold Design to Enduring Classic

One of the shortest-lived series in U.S. coin history, the 1908-1929 Gold “Indian Head” $5 coins are collector favorites today. People love the magnificent portrait of an authentic-looking Native American on the obverse and the proud Bald Eagle on the coin’s reverse. But what really sets these coins apart is their recessed or incused design – which was basically a reverse of the normal die in that the design was pressed into the coin rather than the typical coin where the design rises outward from the coin. Designed by Boston sculptor Bela Lyon Pratt, the $5 Gold Indian is joined by the $2.50 Gold Indian struck during the same period as the only U.S. coins ever issued with incuse deigns, making them two of the most intriguing American coins ever issued!

In this offer you can obtain a 1909 $5 Gold Indian struck at the Denver Mint. Each coin available in this offer has been graded by either the Numismatic Guaranty Corporation (NGC) or the Professional Coin Grading Service (PCGS) as being in Mint State-62 (MS62) Uncirculated condition, complete with rich intricate detail that can still be savored by today’s collectors!

These century-old coins would be hard to locate in this condition due to their age alone, but in 1934, the United States government passed the Gold Reserve Act. The purpose of the act was to protect the currency system of the United States by providing a better use of the country’s monetary gold stock. This was the height of the Great Depression, and what the Act really did was outlaw most private possession of gold. By law, it forced people to sell their gold coins to the U.S. Treasury, after which most of it was stored at the U.S. Bullion Depository at Fort Knox or melted down and converted to gold bars. In fact, many of the $5 Gold Indian coins that have survived to today are those that were safely stored in European bank vaults!

Now you can secure one of these historic $5 Gold Indians for your collection! Though tough to find today, this fabulous 1909-D $5 Gold Indian can be yours!

When the new $5 Gold Indians were released after the Turn of the Century, folks gasped. The design was sunk into the surface of the coin rather than raising it above – and what a design! Secure one of these 100-year-old golden treasures now in Uncirculated condition now! Grading service varies.