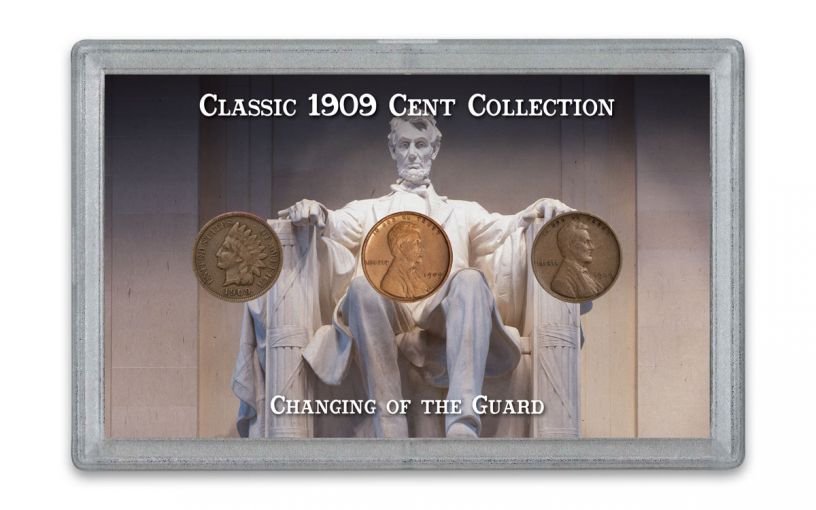 Availability: In Stock
This item will ship within 2 business days.
Item #
249752
Add to Wish List Add to Wish List Wishlist is for registered customers. Please login or create an account to continue. Add to Compare

First released in 1909 on the centennial of President Abraham Lincoln’s birth, the Lincoln Cent is the longest running coin design in the history of the United States. Although it has undergone several changes, mostly on the reverse, the bust of Lincoln designed by Victor David Brenner has appeared on the U.S. Cent for more than 100 years. Now you can get a special set of one-cent coins that pays tribute to the Lincoln Center and the coin it replaced – the Indian head Cent.

This three-coin set includes the last issue of the Indian Head Cent, featuring U.S. Chief Engraver James Barton Longacre’s design of Lady Liberty wearing a headdress, and two of the first Lincoln Cent releases. That’s right; we said “releases” – plural – because the initial release of the 1909 Lincoln Cent met with a tremendous backlash from the public. When it was first released, the Lincoln Cent was considered scandalous because Brenner’s initials, VDB, were considered to be too large. The U.S. Mint responded to the complaints by reducing the size of the initials. The public criticism continued and did not abate until a THIRD Lincoln Center penny was trotted out in 1909, this time with the initials removed completely.

Not only will you get the last Indian Head Cent from 1909 in the set, you’ll also get the “scandalous” Lincoln Cent and the third and final release of the 1909 cent without the VDB initials. Initials or not, the Lincoln head Cent is still the first U.S. circulating coin to feature a past president. Seize your chance to own all three of these key-date coins. Your set will come in highly desirable Extremely Fine (XF) condition and accompanied by a certificate of authenticity.

Firsts and Lasts are always important in any collection, and in this set you get BOTH! Add the1909 U.S. One Cent Indian and Lincoln Three-Coin Set to your cart today!