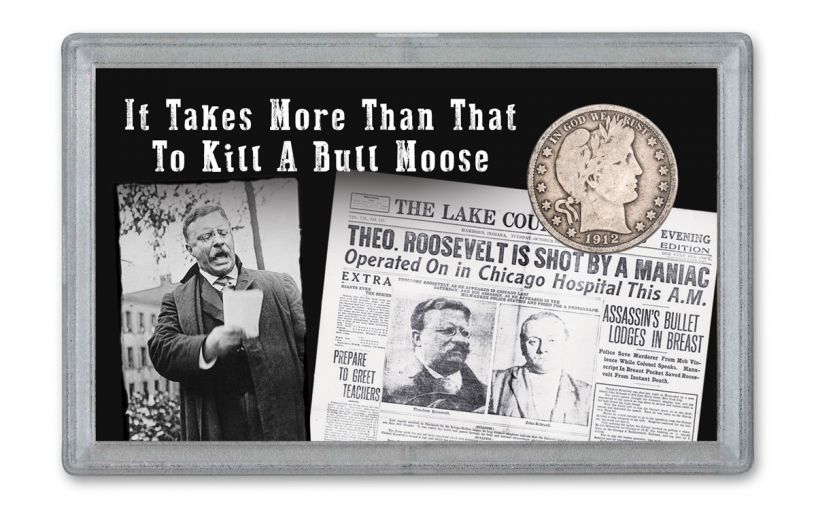 Availability: In Stock
This item will ship within 2 business days.
Item #
356444
Add to Wish List Add to Wish List Wishlist is for registered customers. Please login or create an account to continue. Add to Compare

The “Bull Moose” Barber Half Dollar

The year was 1912. Former President Theodore Roosevelt had previously stepped aside and supported William Howard Taft’s successful run for the presidency in 1908. Four years later, however, things had changed and Roosevelt did not approve with some of his hand-picked successor’s decisions. He challenged Taft in the Republican Convention but lost. Not giving up, Roosevelt formed the Progressive Party – nicknamed the “Bull Moose” party – which split the vote and led to Democrat Woodrow Wilson winning the presidency. On the campaign trail, Roosevelt was shot in the chest while preparing to make a speech – and decided to finish his speech anyway, bellowing to the crowd that “It takes more than that to kill a Bull Moose!”

This Barber Half Dollar was struck in highly pure 90% silver and comes in Very Good (VG) condition. It will also be encapsulated in an exclusive 3" x 5" holder with a custom-designed card that lets you view both sides of the coin. You’ll also receive a vintage 3-cent postage stamp that features Roosevelt’s 22-room Queen Anne-style home, Sagamore Hill. Located in Oyster Bay, New York, Sagamore Hill was known as the “Summer White House” for the seven summers Roosevelt spent there during his term. As with anything connected to the indefatigable Roosevelt, it’s no surprise that “Sagamore” is an Algonquin word for “chieftain.” The home was opened as a museum in 1953 – the same year this stamp was issued.

This coin-and-stamp set is an absolute must-have for any fan of American history in general and the “Bull Moose” in particular. Click it your cart today!

You think today’s elections are crazy? Relive the 1912 Presidential Election when former President Teddy Roosevelt formed his own party with this 1912-dated “Bull Moose” Silver Barber Half Dollar!