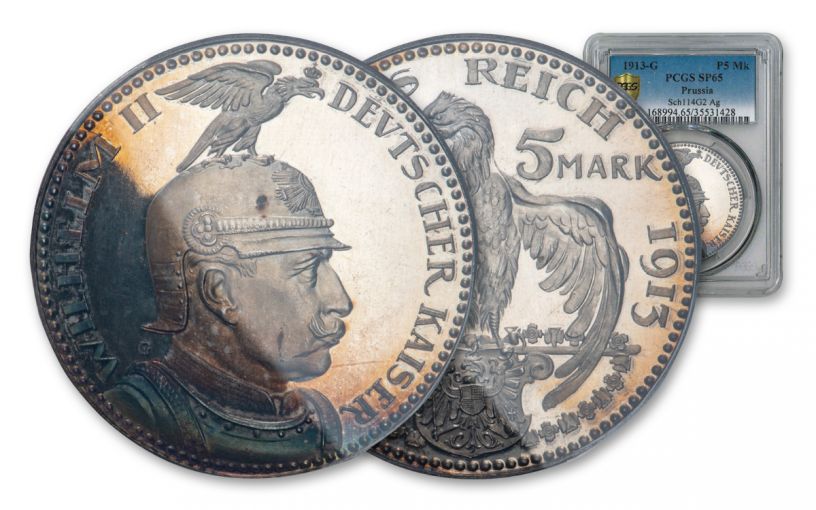 Availability: Call-In Only
This item is only available on a Call-In basis. Please call 1-800-510-6468 to speak to a representative.
Item #
339444
Add to Wish List Add to Wish List Wishlist is for registered customers. Please login or create an account to continue. Add to Compare

This pattern coin was not struck for circulation, which is a shame – just look at the fine details on the helmet and eyes of Germany’s Kaiser Wilhelm II on the obverse and the eagle on the reverse. They’re absolutely spectacular, with superb levels of craftsmanship and a strike so crisp that you can’t turn away. The eye appeal is incredible!

Collectors are always seeking out the one thing that no other collector can have. This is that coin! According to the PCGS population report, this coin is the single highest graded and finest known of the six they have graded. It comes certified as being in Gem Uncirculated Specimen-65 (SP65) condition, and features rainbow toning that further enhances its eye appeal. For any collector of foreign coins – especially European coins – this Wilhelm II pattern coin is a must-have.

Why was this coin struck? Who knows, but it does offer some insight into the turbulent times leading up to World War I. It was well-known that Kaiser Wilhelm II was the product of a typically militaristic and über-masculine Prussian upbringing. The oldest grandchild of Great Britain’s Queen Victoria, Wilhelm felt that he was under constant pressure to “act tough” and measure up to his English relatives. This behavior manifested itself in his manner of dress where he was almost never seen out of a military uniform. According to some sources, he had as many as 400 different uniforms!

Perhaps his most famous uniform featured a specially designed spiked or pickelhaube helmet. Arguably one of the most enduring symbols of the First World War, Germany’s helmet with an ornamental metal spike on top was instantly recognizable by friend and foe alike. Kaiser Wilhelm’s militaristic obsession took it a step further and surmounted a white eagle on top of his helmet in place of the spike. And to further distinguish himself, the eagle itself is adorned with its own crown.

It is that image that resides menacingly on the obverse of this coin. Not to be outdone, the reverse shows a positively evil-looking eagle wrapping its wings around a crown atop a flat shield. Perhaps even a militaristic warmonger like Wilhelm II knew better than to release this coin for wide circulation just as Europe was beginning to rattle its sabers on the eve of all-out war!

This spectacular coin can be yours – but only if you act fast! Owning a piece as scarce as this in the finest grade known is a once-in-a-lifetime opportunity! Don’t let it slip away; reserve it to your cart today!

Struck in limited quantities on the eve of World War I, this rare 1913 Prussia 5 Mark Pattern in Specimen-65 condition is the finest known example of this coin in existence. Add it to your collection today before someone else snatches it away!