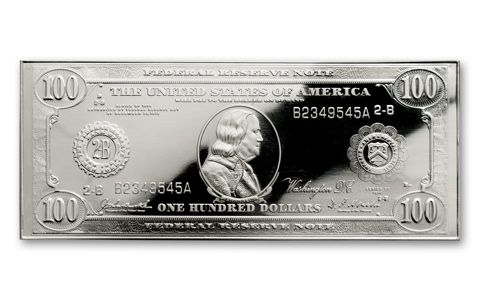 Availability: Out of Stock
Discontinued Product
Item #
252601
Add to Wish List Add to Wish List Wishlist is for registered customers. Please login or create an account to continue. Add to Compare

It's all about the Benjamins.

That slang for a $100 bill is easy to understand. Benjamin Franklin is pictured on every U.S. $100 bill, right? Yes, that's true—but it wasn't always so.

But in 1914, the U.S. Treasury printed the very first $100 bills to feature the portrait of our beloved Founding Father, Benjamin Franklin. Since then, every $100 bill issued has featured Franklin's image. This is no small honor. For the last 45 years, the $100 bill is the largest denomination U.S. currency issued by the government.

A Silver Banknote for a Diamond Anniversary

This year marks the 100th anniversary of the first $100 Franklin note. To honor this impressive milestone in American currency, GovMint.com has just released a spectacular one ounce 1914 $100 Silver Banknote Proof. Each gleaming silver proof is a stunning adaptation of the original intricately-engraved 1914 $100 bill.

This first-ever Silver Proof is even more beautiful than the original, because it's struck in pure, precious silver! It's a landmark in proof minting, combining unprecedented weight with extraordinary dimension. The specifications for this colossal medallic proof are unparalleled:

The original 1914 $100 bill was a masterpiece of American banknote engraving. But when these same exquisite details are struck in pure silver, the results are a true precious metal masterpiece!

From the intricately engraved border details, to the Federal Reserve and U.S. Treasury Seals, to the original side view portrait of Benjamin Franklin, this is a magnificent $100 Silver Banknote Proof you'll want to display to family and friends.

Your 1914 One Ounce $100 Silver Banknote Proof comes enclosed in a custom acrylic holder to preserve its mirror-like proof surface. Each Silver Proof is accompanied by a serial numbered certificate of authenticity, all housed in an elegant presentation case.

This is GovMint.com's FIRST EVER release of this 1914 One Ounce $100 Silver Banknote Proof. This exclusive release is only available through this offer, and only during the limited striking period scheduled for this Silver Proof.

The 1914 One Ounce $100 Silver Banknote Proof is strictly limited to an edition of only 9,999 proofs. Each proof is accompanied by a serial numbered certificate of authenticity – and the earliest orders will claim the coveted lowest serial numbers. Don't delay!