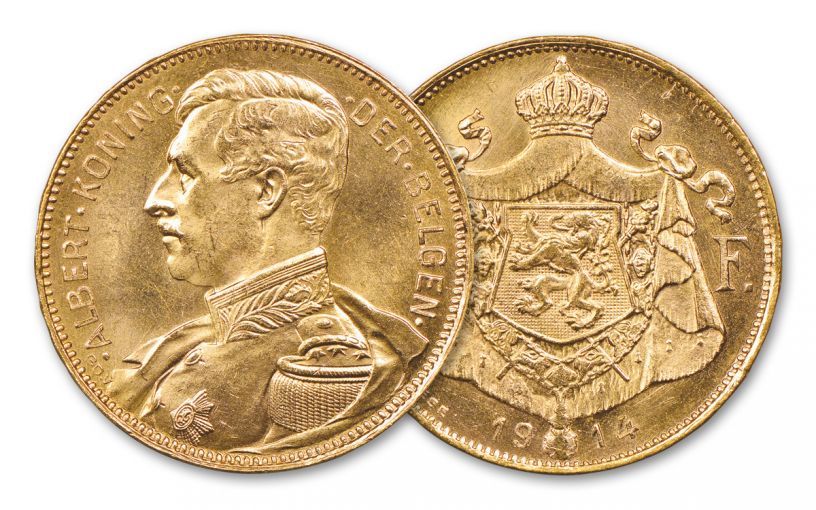 Availability: Out of Stock
This item is currently Out of Stock. Please sign up to be notified if this product becomes available.
Item #
333503
Add to Wish List Add to Wish List Wishlist is for registered customers. Please login or create an account to continue. Add to Compare

First and Last Belgian Gold From World War I

Struck during the first year of World War I, this 20 Francs gold coin from Belgium displays King Albert I in full military regalia. Though he reigned from 1909 until 1934, the only gold coins bearing his image were these 1914-issued pieces. What’s more, this coin is the last 20 Francs gold coin issued by Belgium! Due to the intensity of the fighting during the War along the Western Front, which included almost all of Belgian soil, the nation was unable to return to striking hard currency during or after the war.

Belgium’s King Albert I was something of a tragic figure. He wasn’t even supposed to be king! First his cousin and then his older brother died, leaving him at age 16 unexpectedly the heir to the throne. When he did succeed to the throne after his father and uncle died he was a popular monarch with his subjects. But the outbreak of World War I in 1914 was not kind to Belgium as 90 percent of the country was overrun and suffered a harsh occupation by German troops. His tireless efforts to help his country navigate through post-war recovery and the Great Depression endeared him with his subjects, who were saddened when Albert, a passionate mountain climber, was tragically killed in a mountaineering accident in 1934.

Get this important historical piece now in About Uncirculated or Brilliant Uncirculated (AU/BU) condition! Conditions vary, but each is more than a century old and has survived two world wars, the Great Depression and multiple gold meltings over the past 100 years. Don’t let this unique coin slip through your fingers. Add one to your cart today!

The 1914 Belgium 20 Francs Albert I Gold Coin is one of the most popular coins from the World War I era. Don’t miss your chance to grab one of these magnificent coins!