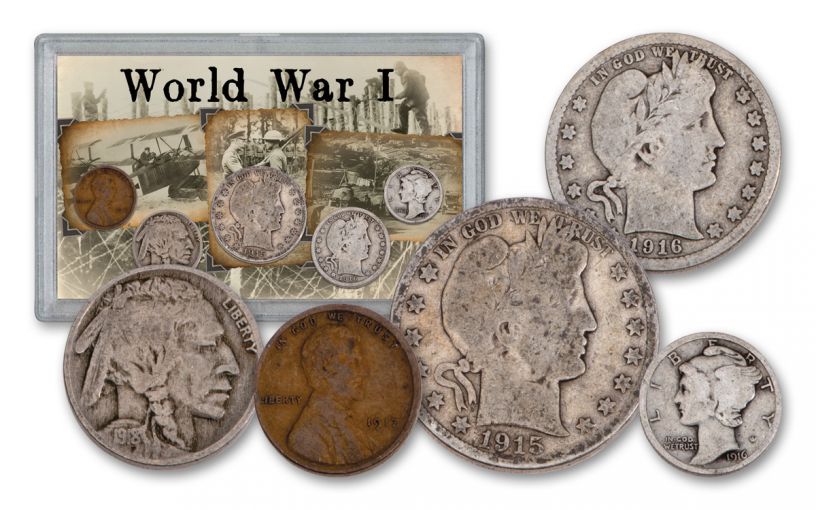 Availability: Out of Stock
This item is currently Out of Stock. Please sign up to be notified if this product becomes available.
Item #
339646
Add to Wish List Add to Wish List Wishlist is for registered customers. Please login or create an account to continue. Add to Compare

More than four million American families sent their sons and daughters to help the war effort in World War I. Back at home, these were the coins that sat in the pockets of those families as they held down the home front. In this five-coin collection, you’ll receive a Lincoln Wheatback Cent, a Buffalo Nickel, a Mercury Dime, a Barber Quarter and a Barber Half-Dollar – all designs that are no longer in circulation! As a special bonus, you’ll also receive a WWI print of the Red Baron. Dates vary, but every coin comes graded in Very Good (VG) condition and was issued between 1915 and 1918!

America tried to stay out of WWI, but once committed, she was all in “Over There.” American Doughboys turned the tide for the Allies, ending the “War to End All Wars.” This set takes you back to that historic bygone era. Now, on the 100th anniversary of the war’s end, keep the memories of those brave men and women alive by clicking one of these historic sets to your cart.

Pay tribute to the 100th anniversary of the end of WWI with this 5-pc set of coins that circulated from 1915-1918 – each in Very Good condition, plus a bonus Red Baron print! Order yours now!