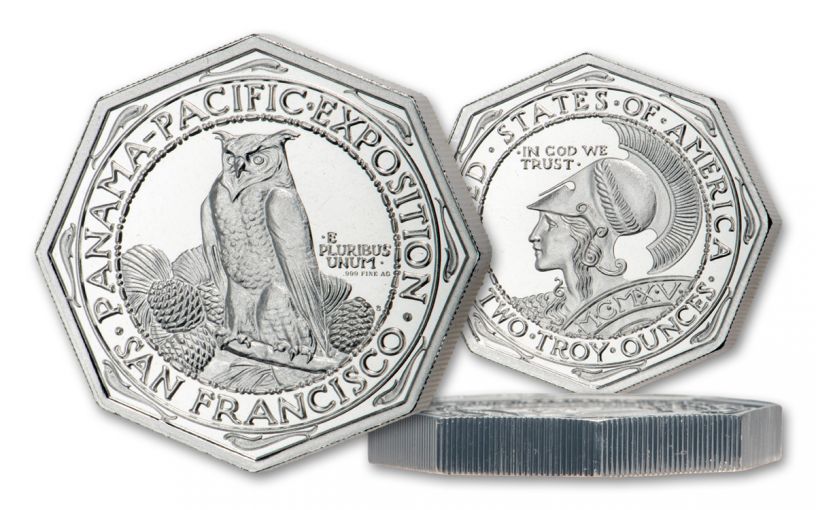 Availability: In Stock
This item will ship within 2 business days.
Item #
345650

When in San Francisco, Do as the Romans Do

In 1915, the completion of the Panama Canal was celebrated in San Francisco with a special Panama-Pacific Exposition. To commemorate the event, the San Francisco Mint struck a number of silver and gold coins, including a $50 octagonal gold piece depicting a bust of Minerva, Roman goddess of wisdom, art and commerce. The reverse depicts an owl perched on a Ponderosa Pine surrounded by pine cones, under the legend PANAMA-PACIFIC EXPOSITION.

As you might imagine, octagonal coins from the U.S. Mint aren’t often seen – in fact, the octagonal $50 piece is the only U.S. legal-tender coin that is not round, making it a highly sought-after collectible. Unfortunately, the San Francisco Mint struck just 1,500 of these classic commemoratives. And out of that small number, only 645 were sold with the balance melted by officials. Needless to say, the original coin is one of the rarest commemorative issues ever struck. That’s why we’re happy to bring you this beautiful silver piece that pays tribute to the original design. Struck in two Troy ounces of highly-pure 99.9% fine silver, it’s a numismatic keepsake that’s perfect for any collection of vintage American coins, as well as a beautiful piece in its own right.

The design of this two-ounce silver tribute expertly mimics that of the original right down to the Roman numerals MCMXV (1915) on Minerva’s shield. The only difference is that instead of a denomination of FIFTY DOLLARS on the reverse, it reads TWO TROY OUNCES. And at 39 mm in diameter, this exquisite silver tribute is only slightly smaller than the original gold piece that measured 44 mm in diameter.

This 1915 Panama-Pacific Expo Octagonal Two-Ounce Silver Tribute is sure to appeal to both modern and classic coin collectors, especially to those who always wanted to own one of the valuable original low mintage $50 gold coins. The iconic design and all the history it represents can now be yours!

Don’t miss your chance to secure the 1915 Panama-Pacific Expo Octagonal Two-Ounce Silver Tribute. Click one to your cart today!