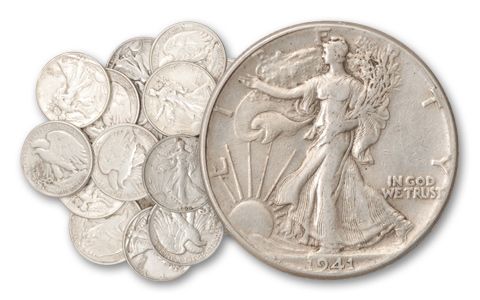 Availability: Out of Stock
Discontinued Product
Item #
182516
Add to Wish List Add to Wish List Wishlist is for registered customers. Please login or create an account to continue. Add to Compare

Run Don't Walk to Get Your Walkers!

Walking Liberty Half Dollars - fondly called "Walkers" - were minted from 1916 to 1947. These were tough times in America. Half a buck was a lot of money - way too much to save. Most of these Walkers wore down, and were later melted in mass numbers when silver hit $48 in 1980. We managed to find a small holding in hard-to-find Extremely Fine condition. Walkers survived two world wars, a depression, and a meltdown! They won't be spared in future silver meltdowns. Get them now, before it's too late!