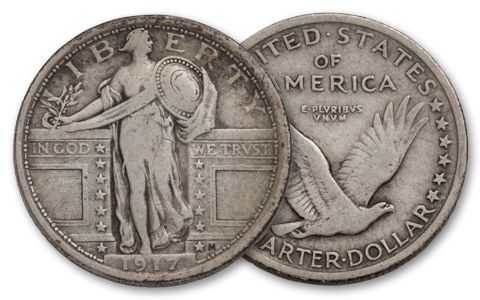 Availability: In Stock
This item will ship within 2 business days.
Item #
184506
CC Payments as low as
$89.50 / month
Add to Wish List Add to Wish List Wishlist is for registered customers. Please login or create an account to continue. Add to Compare

When the 1917 Standing Liberty Quarter was released, the New York Society for the Suppression of Vice was aghast at the “immorality” of the coin. You see, in classic style, one of Miss Liberty’s breasts was exposed! The guardians of prudery exerted political pressure, and the coin was quickly changed, covering up the shocking appendage. As a result, these 1917 quarters are both scarce and desirable today.

In addition to the gasps of horror emanating from the Society for the Suppression of Vice, the other controversy surrounding this coin was the identity of the model used by sculptor Hermon Atkins MacNeil to create the design. For years the model was reported to be Doris Doscher. Nicknamed the “girl on the quarter,” Doscher later became a silent film star under the somewhat exotic name of Doris Doree. Years later, however, it was claimed that the real model was actually Broadway actress Irene MacDowell, whose name was kept secret because her husband was one of MacNeil’s tennis buddies and he would have disapproved. It was also later claimed that the deception was concocted to fool MacNeil’s wife, who saw MacDowell as a romantic rival for her husband’s affections. In 1982, Doscher’s widower claimed that it was his wife after all. Who was it really? We may never know, but the end result was one of the biggest controversies in numismatic history!

Now you can get one of these historic and popular coins. We have them available in Very Fine (VF) condition. And luckily, you can get one without fear of reprisal – the Society for the Suppression of Vice is kaput!

Closing The Society for the Suppression of Vice couldn’t stand for this coin – but you can! Add the fascinating 1917-P 25 Cents Silver Standing Liberty to your collection today!