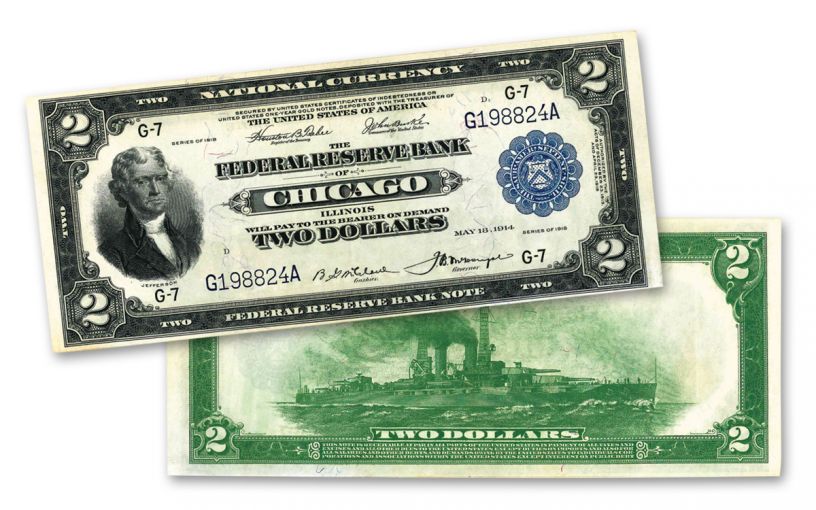 Availability: Call-In Only
This item is only available on a Call-In basis. Please call 1-800-510-6468 to speak to a representative.
Item #
339375
Add to Wish List Add to Wish List Wishlist is for registered customers. Please login or create an account to continue. Add to Compare

It was 1918, and World War I was coming to an end. We saved Britain and France, and when it was time to issue a new $2 Federal Reserve Bank Note, the government used the reverse for a propaganda message.

The obverse design featuring Thomas Jefferson and the issuing Federal Reserve Bank is innocuous enough, but the reverse, displays a stunning vignette of the battleship USS New York steaming from west to east and gave a clear warning: The U.S. is ready, willing and able to defend Europe – and just over 20 years later, we did.

Although the Federal Reserve never intended to create one of the most collectible notes ever, that’s just what they did. This large “horse blanket” note is rarely seen and highly coveted, and we managed to find this one in Extremely Fine (XF) condition, with stark blue serial numbers and seal.

The popularity of this note is not due just to its scarcity, but also for the beautifully engraved image of the USS New York, the lead ship in the U.S. Navy’s New York Class of battleships. Commissioned in 1914, the New York was the first ship to carry the Navy’s new 14-inch guns. She went on to see action in both World War I and World War II.

The New York was the only American ship to sink a German U-Boat during the First World War, and served in both the European and Pacific Theaters during the Second World War. She provided support to General George Patton’s troops near Casablanca during the Operation Torch Invasion of North Africa in 1942, and later delivered gunfire support from 1944-1945 during the invasions of Iwo Jima and Okinawa. Classified as obsolete after the Second World War, the New York survived the nuclear weapons tests at Bikini Atoll in 1946, and was finally sunk as a target in 1948. A product of the Brooklyn shipyards, she is fondly remembered as “The Old Lady of the Sea” for her long and venerable service to her country and allies.

Your note will arrive in a clear archival holder for optimal viewing. Secure this important piece of U.S. history today!

Don’t miss this popular piece of historic currency – make your collection ship-shape with the addition of this fascinating bank note!