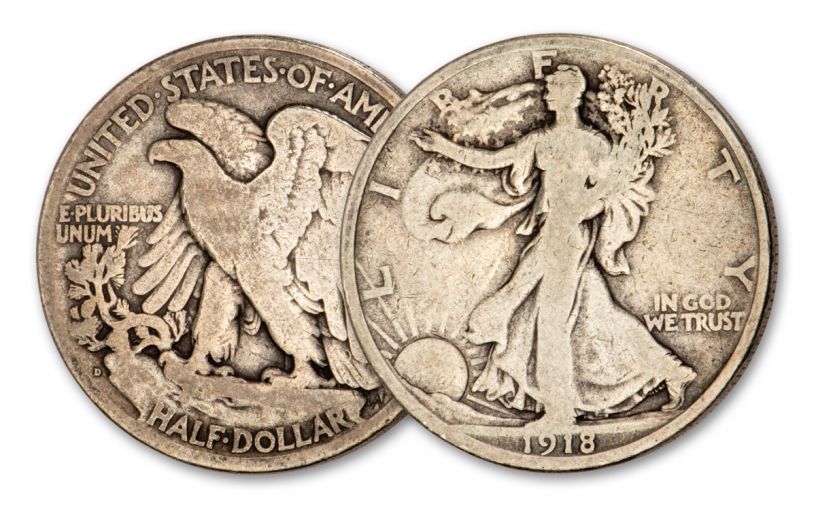 Availability: In Stock
This item will ship within 2 business days.
Item #
367351
Add to Wish List Add to Wish List Wishlist is for registered customers. Please login or create an account to continue. Add to Compare

End of World War I Walking Liberty Half Dollar

On November 11, 1918, the gunfire finally ended when Germany formally surrendered. Known then as Armistice Day, it was the day that all the nations involved in the destructive conflict agreed to stop fighting and begin negotiating a peace treaty that would be signed the following year. This 1918 Walking Liberty Half Dollar, a third-year-issue, was struck the same year the fighting finally stopped.

Struck in 90% fine silver, this coin is affectionately known to many collectors as a “Walker.” With its iconic images, the Walking Liberty Half Dollar is surely one of the most beautiful coins ever struck by the United States Mint. Lady Liberty is shown striding towards the sun, her right hand open and outstretched as if in invitation. In her left arm is a bouquet of olive branches. The coin’s reverse depicts a stylistic eagle standing on a rock ready to take flight. A mountain pine sapling springs from the rock, symbolizing America. Famously designed by Adolph A. Weinman, the Walking Liberty is so iconic and beloved that it was resurrected in 1986 as the obverse for today’s Silver Eagles! This patriotic design always proved difficult to strike, meaning that finding circulated specimens in nice condition can be difficult. But in this offer, you can secure one of these key-date 1918 Walkers in nice collector-grade Very Good (VG) condition. Mint marks will vary.

On the eleventh hour of the eleventh day of the eleventh month of 1918, World War I finally came to an end. Here’s your chance to get a key-date 1918 Walking Liberty Half Dollar from the last year of “The War to End All Wars.” Order yours now!

Here’s your chance to get a Walking Liberty Half Dollar struck during the last year of World War I. Order yours now while they’re still available!