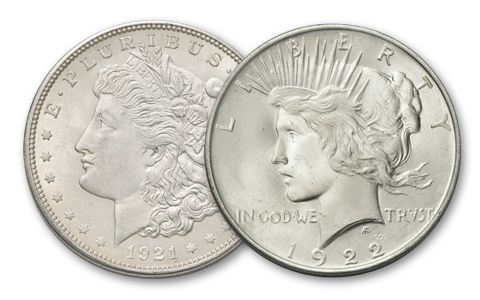 Availability: In Stock
This item will ship within 2 business days.
Item #
232547
Add to Wish List Add to Wish List Wishlist is for registered customers. Please login or create an account to continue. Add to Compare

The last Morgan and the first Peace Dollar

They are two legendary coins with a lot in common. They're the last two 90% U.S. Silver Dollar series minted from ore found in Nevada's Comstock Lode. They were both struck at the "Mother Mint" in Philadelphia. And as vintage U.S. Silver Dollars, they're among the most collected coins in the entire world.

91 years since they first rolled off the presses, the 1921-P Morgan and the 1922-P Peace Dollar continue to be coveted key dates in U.S. Silver Dollar history. If you were to purchase these coins elsewhere, in Brilliant Uncirculated condition, you'd spend an additional $20! Hurry, these limited sets contain two of America's most popular Silver Dollars - they will not last!