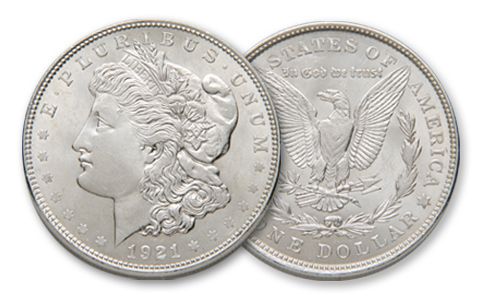 Availability: Out of Stock
This item is currently Out of Stock. Please sign up to be notified if this product becomes available.
Item #
228778
Add to Wish List Add to Wish List Wishlist is for registered customers. Please login or create an account to continue. Add to Compare

The end of an era: last-year 1921 Morgan Silver Dollars!

In 1921, a single Morgan Silver Dollar in your pocket gave you real buying power – over 12 times more than today's paper singles! Just one Morgan was good for nearly four gallons of gasoline. And, if you were really in the money, 325 of these hefty silver coins could put you behind the wheel of a brand new automobile! But, after a span of 43 years, 1921 would mark the end of the line for America's most famous and collected U.S. silver coin.

While they last, you can now own a 1921 Morgan Silver Dollar in About Uncirculated (AU) condition, struck 95 years ago at the Philadelphia Mint from 90% pure "American" silver mined from Nevada's legendary Comstock Lode. In today's coin market, finding any quantity of Morgans is a stroke of luck. While they were produced in massive quantities between 1878 and 1921, it's estimated that as few as 15% of all Morgans have survived for today's avid collectors, from being melted down in the millions whenever silver prices soared.

The Morgan Silver Dollar is coveted by collectors the world over, and it is arguably the most famous – and collected – U.S. silver coin of all time. Take this opportunity to complete your Morgan Silver Dollar collection with this historic last-year issue! With millions of collectors in the U.S. alone, our limited supply is sure to go fast. Order yours now – before they're only a memory!