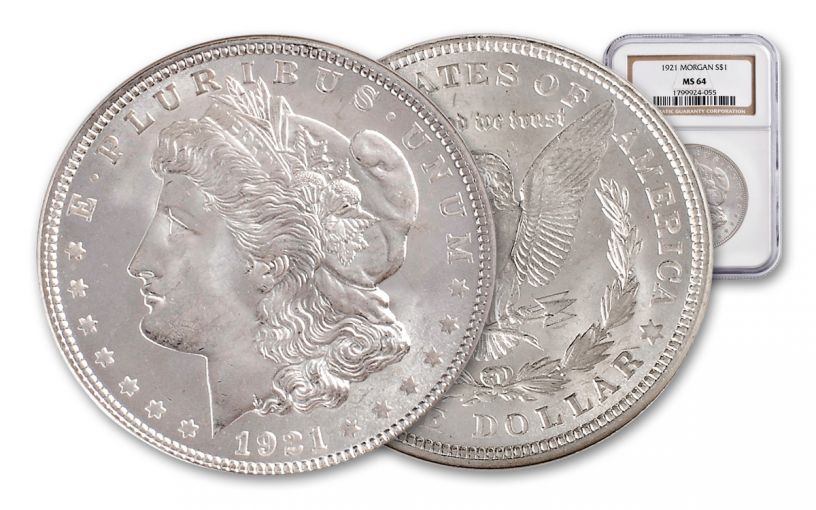 Availability: In Stock
This item will ship within 2 business days.
Item #
183494
Add to Wish List Add to Wish List Wishlist is for registered customers. Please login or create an account to continue. Add to Compare

Facing underwhelming demand and a dwindling supply of silver bullion, the U.S. Mint shut down its production of Morgan Silver Dollars in 1904. More than a decade later, the Pittman Act of 1918 resulted in the melting of more than 270 million Morgans stockpiled in U.S. Treasury vaults. The Pittman Act also required the striking of millions of new silver dollars. These were to be the Peace Silver Dollars commemorating the peace following World War I. Before the Mint could get the Peace Dollar ready, they needed to get out tens of millions of silver dollars first – and fast! So, in 1921 the Morgan returned for a marathon mintage of more than 85 million coins spread out over three mints. The Peace Dollar made its debut late in 1921 and finally began to circulate in 1922, retiring the iconic Morgan design from America’s silver dollars for good.

Despite those huge numbers, the resulting decades have not been kind to 1921 Morgans. Subsequent melting and circulation have whittled away their existence to only a small fraction of their initial mintages. Fortunately, GovMint.com has a procured a selection of these last-year-of-issue Morgans, and they're available to you at a great value! Each of these 1921 Morgan Silver Dollars were minted in Philadelphia and come graded by either the Numismatic Guaranty Corporation (NGC) or the Professional Coin Grading Service (PCGS) as being in Choice Uncirculated Mint State-64 (MS64) condition showcasing beautiful, sharp detail that has endured for almost a century!

Because this coin represents the final year of the Morgan Silver Dollar series, it’s an absolute key-date, must-have for any U.S. coin collection. Firsts and lasts are always coveted by collectors. And though the original mintage of this coin at the Philadelphia Mint was fairly high, coming in at nearly 44.7 million, many of those coins met their end in the bottom of a melting pots over the years due to the Wartime Silver Act of 1942 that caused even more coins to be melted along with untold millions of additional coins that were melted when the price of silver shot up to over $50 per ounce in from 1979 to 1980. In fact, you’ll find only 7% of this date and mint mark graded higher than MS64 condition!

Don't let this chance to own the last of the Morgans disappear again. It’s A must-have at a great price; get yours today! Grading service varies.

This 1921-P Morgan Silver Dollar in Choice Uncirculated MS64 condition gives you the perfect opportunity to own a key-date Morgan! Order yours now!