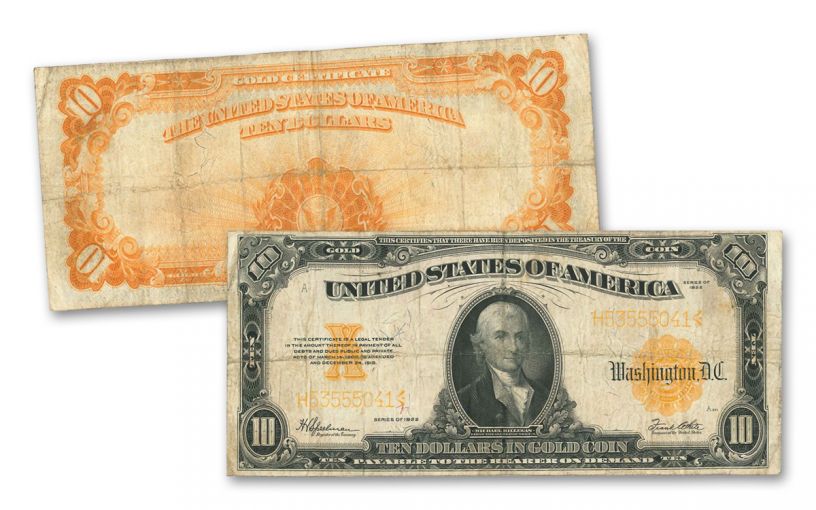 Availability: In Stock
This item will ship within 2 business days.
Item #
228139
CC Payments as low as
$214.50 / month
Add to Wish List Add to Wish List Wishlist is for registered customers. Please login or create an account to continue. Add to Compare

Last of the Large-Sized $10 Gold Certificates

Believe it or not, there was a time in this country when you could go to the bank, take out your wallet, and trade a single note for a hefty $10 gold coin! That note was the $10 Gold Certificate, which you can secure here in Fine (F) condition. This was the last series of large-sized $10 Gold Certificates, many of which were later recalled and destroyed after the U.S. left the gold standard behind in 1933. The front displays Michael Hillegas, the first Treasurer of the United States — a man largely lost to historical obscurity until his descendants petitioned to have his face placed on the 1922 and 1907 $10 Gold Certificates. The back of the note displays the Great Seal of the United States printed in vibrant gold ink — just in case anyone doubted the note was redeemable in gold.

Not only was Michael Hillegas America’s first Treasurer, serving in that position for 14 years, those years were all served BEFORE the United States ratified the Constitution! Prior to the American Revolution, Hillegas was a successful merchant who amassed a small fortune through his investments in a sugary refinery and an iron mine. Showing the diversity of his investments, it’s believed that he also operated North America’s first music store.

Now you can secure America’s last large-sized $10 Gold Certificate and make the interesting life of the patriot it portrays a part of your collection forever!